By Rose Lipner, Deputy-Editor In Chief 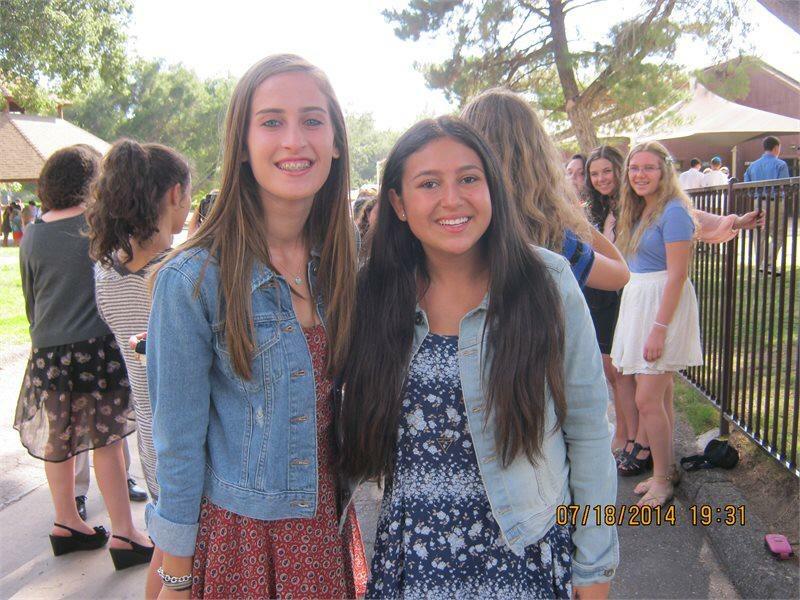 WELCOME: Pictured at Ramah during the summer of 2014, juniors Michelle Greenberg and Sarit Ashkenazi are both were excited that their camp would be hosting refugees.

Camp Ramah of California, a summer camp in Ojai attended by many Shalhevet students and faculty, may begin housing hundreds of child refugees from Central America starting as soon as next week, camp officials have confirmed to The Boiling Point.

Ramah President Dr. Andrew Spitzer told The Boiling Point it wasn’t definite yet but that camp officials had been in touch with the Department of Health and Human Services, which takes care of such children.

“This is a very fluid situation and we’ve only briefly been in touch with HHS,” said Dr. Spitzer, who is the father of Shalhevet alumni Sigal, Talia and Eitan Spitzer, in a telephone interview.

VCStar.com, the website of the Ventura County Star, reported yesterday that about 400 refugees ages 12 – 17 could be housed at Ramah during a current surge of children arriving alone, mostly from Honduras, Guatemala and El Salvador.

According to the United Nations, those are the three most violent nations in the world, with murder rates as high as 91 per 100,000 people.

“Our approach on this is that children and young adults are going into the U.S unaccompanied, they’re fleeing violence, crime, and poverty in their own areas, and we’ve been asked to provide temporary housing,” Dr. Spitzer said. “It falls in line with who we are to try to help these people.”

“I can confirm that Camp Ramah in California has provided our availability but has not received a request to provide services,” said Rabbi Menashe, who is known to campers and staff as Rabbi Joe.

When told of the news by the Boiling Point yesterday, Shalhevet’s Ramah campers were excited.

“This is pretty cool,” said senior Yonah Feld. “It also puts Ramah on the international map. Not many camps can say they housed 400 refugees.”

Junior Michelle Greenberg, who has spent seven summers there, was proud of her camp.

“It represents that Ramah is a welcoming place that you know you can go to no matter what your story is,” said Michelle.

Art teacher Ms. Roen Salem, who has worked there summers for 26 years, was shocked by the news.

“It’s a really big mitzvah,” she added. “Nobody helped us during the Holocaust, so it’s our responsibility to help others.”

Students also thought it might improve the community’s image.

“I think this is great because it’s really nice of them to do and it gives [Ramah] a good reputation,” said junior Sarit Ashkenazi.

“This is so cool for Ramah because it looks good for us as Jews,” said Michelle Greenberg.

Camp Ramah hosts more than 1,300 campers each summer over the course of two four-week sessions, according to Wikipedia. There is also a session in August for children with special needs.

The camp also holds programs during the winter months, including an eight-day program over Pesach.   According to its website, it has various programs planned there for alumni and prospective campers the weekend of Jan. 8 – 10.

Neither Dr. Spitzer nor Rabbi Menashe would say whether these programs would be affected, how many children would be coming, how much of the camp grounds would be used or how long the refugees might stay.

But Shalhevet students did not seem worried.

“As long as they’re safe, I guess it doesn’t really matter,” said freshman Abbi Sentchuk, who has spent 11 summers at Ramah.

Asked whether Shalhevet students could send cards or welcoming posters to the children, Dr. Spitzer said he’d know more when things were definite.

“Once this situation becomes clarified, it would be a wonderful idea,” he said.

Dr. Spitzer also said summer would not be affected by the program.

“This would in no way be impacting our summer,” he said.

According to the American Immigration Council, refugee children arriving alone in the U.S. are housed by HHS until they are sent to live with relatives or a sponsoring organization, who host them while they await a hearing to determine whether they can stay.

VCStar,com reported Monday that an email from the office of U.S. Rep. Julia Brownley (D-California) said a surge in child immigration had created a need for 9,000 more beds. During past surges, some immigrant children were housed at the U.S. Naval Base at Port Hueneme.

“HHS reportedly said they wanted to use sites like Camp Ramah instead of military bases to meet the latest demand for housing,” reported VCStar.com.

The last time this happened was in June 2014, when about 1,500 children were processed at Port Hueneme over a period of 10 weeks, the website said.  Mark Weber, HHS Deputy Assistant Secretary for Public Affairs, said the current surge meant the department needed to increase its capacity by 1,400 beds, to 9,800 nationwide.