A view from Israel, Part 3: Surreality 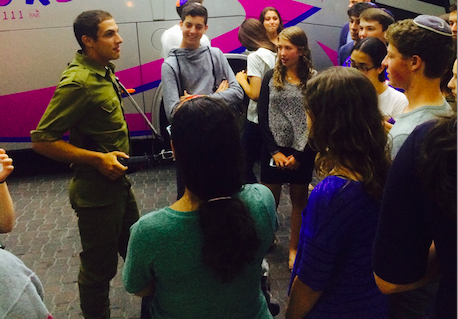 REST: An IDF soldier on leave from the fighting in Gaza addressed Bnai Akiva students in Jerusalem July 22.

BEERSHEVA, Aug. 1: In the past few weeks since my last update, I have done a multitude of things. I completed a four-day army simulation, fired an M-16, slept in a Bedouin tent, hiked Masada, floated in the Dead Sea, and heard my first air raid siren. The situation in Israel becomes more surreal by the day. Whether it is the Twitter feed of the IDF or the reaction of people around me, each day the effects of the conflict hit closer to home.

I was part of a four-day simulation in which I was treated as if I was a soldier. I wore the army uniform and learned to shoot the very gun that our soldiers are currently using to defend themselves and the state of Israel against Hamas fighters in the Gaza Strip.  The fact that I was learning to shoot the same weapon as the soldiers made the whole situation more surreal. I was treating the weapon as a toy; they are using it to protect. That weapon kills. As much as we on Ramah Seminar were joking around, those guns are used to kill and defend.

The next experience that has made this situation more surreal was learning about deaths of the soldiers and who they affect. The boyfriend of a female commander at our army program was one of the 13 Golani soldiers killed in Gaza. Another one of those soldiers, Max Steinberg z”l, was a lone soldier from Los Angeles – just like my brother Saul will be, and many others who we know. Two of those soldiers were Gareen Sabar soldiers — part of a program that helps people who are not from Israel make aliyah. This is the same program my brother and countless others are doing. The best friend of my counselor from last summer at Ramah was killed in the same operation. Out of just those 13 Golani soldiers there are so many that I feel a connection with and I didn’t even know them. Everyone is connected to these soldiers in one way or another.

The next experience has happened this past week. We are currently in the south on a kibbutz, 37 miles from Gaza. We are near Beersheva. A few nights ago I heard my first siren. I ran into a room along with about 30 people. I didn’t feel scared at all. In fact, I took a picture and put it on my Snapchat. We sat in a room for about 10 minutes, then were given the okay to leave our rooms. The missile was aimed for Beersheva. When you talk to anyone in Israel who has heard a siren, it means nothing to them.  Iron Dome and the shelters have made these missiles just another part of the surreal.

Yesterday my counselor came to our group in tears. A member of his squad and a soldier who he was once in charge of had been injured. They were in a building when a bomb went off and the building collapsed on them.  He left us for the day and went to Beersheva where they were being hospitalized. This was the same counselor who in my last update was expressing a large amount of guilt for not being out fighting in this situation.

On my free weekend, I had the pleasure of staying with a friend who had made aliyah. He described his reasoning for making aliyah as he didn’t want to just sit on the sidelines, he wanted to play in the game. I can only imagine that my counselor is feeling that and then some.

In fact, I think everyone is feeling that a little bit. My brother keeps on expressing to me that he wishes he had made aliyah a year ago so he could be fighting right now. It’s incredible to me how passionate people are about defending this nation.