BIDEN: A pledge, and real plans, to confront tough issues

At first, when asked why I am pro-Biden, I couldn’t find an answer. Since the day President Trump got elected, many Democrats like me were waiting to vote for or support anyone who opposed him.

But after researching further, I realize I’m pro-Biden because of more than that. I’m pro-Biden because despite the narrative surrounding him that he is “boring,” he has pledged to take on tough issues in America and adopt policies to confront white supremacy, tackle climate change, and fix the immigration system, to name a few.

Biden has a plan to counter white supremacy, a threat affecting us as Jews and an issue affecting America at large. According to the Department of Homeland Security, white supremacy is the biggest terrorist threat to our nation, and one that Trump has done nothing about. Biden has regularly denounced it, which is already more than Trump, but since merely condemning it isn’t enough, Biden will also restore funding to fight domestic extremism, appoint Justice Department officials who will investigate and prosecute it, and pass a law that bans white supremacy while maintaining free speech and civil liberties.

Climate change is an extremely pressing issue for America and the world. Biden has vowed to enact policies that will have America at net-zero emissions by 2050, and he will do so while creating jobs and improving our infrastructure. Trump, however, pulled us out of the Paris Accord, and rather than trying to improve the climate situation, rolled back more than 125 climate protections and allowed pollution to grow unchecked.

Biden also has a comprehensive plan to fix our immigration system. Trump has encouraged a system that denies human dignity by limiting legal immigration and asylum, forcing people to live in tents with no bathrooms by the border. The system is underfunded and mismanaged — judges have too big a caseload to deliberate properly and children are separated from their parents and tried separately in court, leading to parents being deported away from their kids.

Biden’s plan will reunify these families and fix the asylum system by appropriating the needed resources. By doing so, our immigration system can return to the original values of our country – accepting others and helping those with nowhere else to go.

People say Trump is the best president for Israel, but Biden’s stance on Israel is one of support. He has promised to combat anti-Semitism in every form, reject BDS and other efforts to de-legitimize Israel, and ensure that Israel maintains a military edge over other Middle Eastern countries, something Trump undermined by attempting to sell the UAE weapons.

As president, Donald Trump has stood for white supremacy, hatred towards immigrants, and policy that makes this country worse, not great. He tried to get rid of the Affordable Care Act without providing any alternative for poorer families; has rolled back important climate change and environmental protections, including fuel economy goals for cars and long-standing clean air and clean water laws; and allowed companies to dig for oil on protected national lands. He has done basically everything a president should not.

I may dislike Trump and his policies, but after having Biden as the nominee for a few months, I have learned to appreciate him as a politician and future president. He has pledged to create the changes that America needs and will provide a necessary shift away from today’s volatile political climate.

TRUMP: A bold defender of Israel and enemy of terrorists 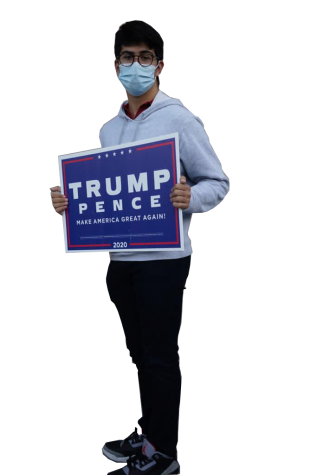 Contrary to popular opinion, not every Trump supporter is a racist bigot who prides himself on being a part of the Trump clan. Some of us, if not most of us, look at what he has done, specifically in terms of  policy, for our country and the world, as the reason to support him in the upcoming election.

The goal of the Paris deal was to reduce greenhouse gas emissions. However noble this idea was, its ineffectiveness and cost to the American taxpayer proved its worth to be little to none, thus Trump’s decision was proper. The airstrike killing Abu Bakr Al-Baghdadi saved American lives by ending ISIS’s reign of terror that constantly endangered our lives.

Not only has he been tough on a foreign power, China — which locks Muslims in concentration camps because their beliefs differ from the Chinese Communist mindset — but he has also promoted peace and normalization agreements between Israel and both Bahrain and the United Arab Emirates, along with a trade deal with Sudan.

In fact, President Trump has been a great advocate for Israel in so many ways. He officially recognized that the capital of Israel is Jerusalem, moving the U.S. embassy from Tel Aviv to Jerusalem. In doing this, he stated to the world that Israel is a Jewish state and will remain so. Moreover, he appointed Nikki Haley as his first United Nations ambassador. Ms. Haley was adamant in standing up for Israel in the U.N., specifically during the Gaza violence in May of 2018, following the opening of the US embassy in Jerusalem. The council constantly condemns Israel for supposed human rights violations, yet a large number of countries on the council violate human rights themselves. These violators are China, Egypt, Saudi Arabia and the Philippines.

Here at home, President Trump has tried to improve our health care. Most think that by asking the Supreme Court to repeal the Affordable Care Act, he is trying to strip many of their health care benefits. Instead, by trying to get rid of Obamacare, he has tried to increase competition in the healthcare market.

Somehow a major headline against the President has been that he refuses to condemn white supremacists, specifically in Charlottesville. But in the very same press briefing, on Aug. 15, 2017 when he stated that there were “fine people on both sides,” President Trump added that was not referring to neo-Nazis or white supremecists. “I’m not talking about the neo-Nazis and the white nationalists,” he said, “because they should be condemned totally.”

While it may be true that President Trump is not the most well-rounded individual, he has openly condemned white supremacists on several occasions and anyone who says otherwise needs to get their facts straight.

Against woke culture, I am a strong supporter of the Trump administration — not because I think he is a good person and deserves my admiration, but because I overlook his character downfalls and understand that his policies are what truly matter. Even though our President may not be the most “politically correct” in his actions, his systems better our economy and society as a whole.