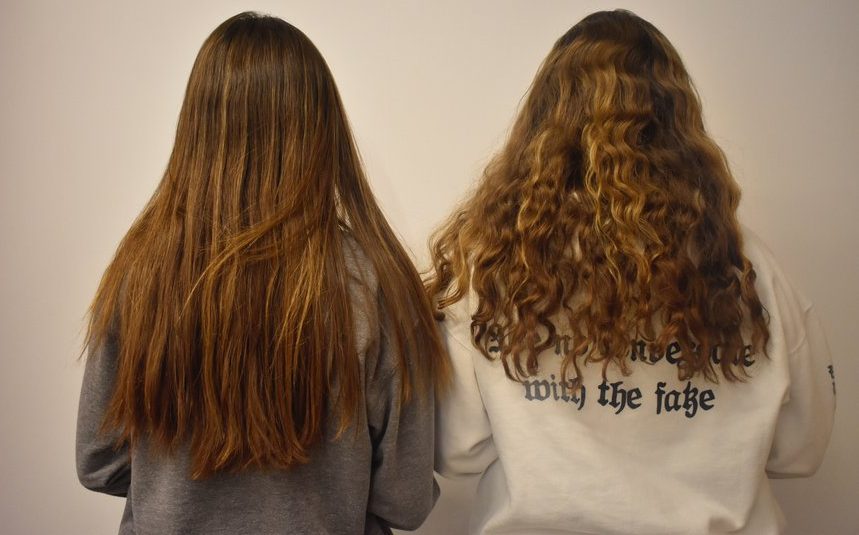 As high schoolers flock to keratin, is beauty still being defined as non-Jewish?

My scalp is burning. My nose is dripping. The combined smell of formaldehyde and the melting, unpronounceable chemicals in my mascara have turned my eyes into a watery disarray.

I am getting my bi-annual keratin treatment. It is something I once did on and off, but committed to doing once a semester during my junior year of high school. So for the last few years, my scalp and hair have undergone the application of keratin — a protein found in the hair, nails, and skin — which combined with the heat of a straightener, relaxes the hair, making it straight.

My hair became curly in seventh grade, one of many wonderful trademarks of puberty, like acne and menstruation. But even more difficult than those were the social pressures I faced upon becoming a woman. Having straight hair was added to the list of beauty expectations I newly faced in middle school.

Once I turned 13, my hair mushroomed out like the top of a nuclear bomb. It was not ordinarily curly – it was a Jewfro. My mother’s hair is the same, and so was her mother’s, and so was her mother’s. There has been a matrilineal line of thick, curly hair in my family, and yet, a stigma persists. In addition to the bump on my nose, my frizzy hair supplemented my list of features that did not follow eurocentric beauty standards that I always saw as more attractive, though I never quite knew why.

A few years ago, a critique and discussion of nose jobs in the Jewish community was a very hot topic. It seemed (especially female) Jewish adolescents were undergoing rhinoplasty left and right as bar or bat mitzvah presents, high school graduation gifts, sweet 16s, Hanukkah, wedding presents, etc. Of course, it was not only Jewish kids, but by the early 20th century, surgeons had recognized “that Jews and other ethnic Americans represented a large potential market for nasal plastic surgery,” as historian Beth Haiken wrote in her 1998 book Venus Envy: A History of Cosmetic Surgery.

Keratin-ing Jewfros seems to be the new way to alter Jewish features, and among girls at Shalhevet, the trend is very strong.

I can’t count with all my fingers and toes the number of Jewish friends and acquaintances I have, at Shalhevet and not, who pay approximately $150 and sit in a salon for almost three hours every few months to have their hair severely relaxed.

While getting her fourth treatment, my friend Maya snapchatted me a photo of herself having the keratin applied to her hair with the caption, “Getting a chemical burn on this fine Sunday, what about you?”

Keratin itself is harmless, but the solution used to apply it usually includes formaldehyde, a known carcinogen and one that causes nerve damage and other symptoms even in the short term. News media and government agencies  had much to say about this beginning seven years ago, investigating after hairdressers complained of nosebleeds, breathing problems and eye irritation. Some parents worry about it as well.

Maya told me she gets minor scabs on her scalp from the treatment, and her hair is greasy and thin for a week afterward.

“So why do you do it?” I asked, knowing exactly why I myself go through the same pain.

With an on-cue and priceless flip of her freshly glossy locks, she said, “Because how else would I get this sleek hair?”

We both laughed and flipped our straight hair with ease. Without keratin, our hair would either stiffly and awkwardly return to its original place, or knot around our fingers.

Still, getting keratin is a difficult decision for me. I know I should take pride in my Jewish looks — Jewfro, bump on my nose and all. But the possibility of a hair treatment that would eliminate the practical problems with frizzy hair — de-knotting it, taming it in the morning and throughout the day, low-self esteem — was too seductive.

Keeping my Jewfro, on the other hand, would be a never-ending time suck of testing products, treatments, hair styles, techniques. Though a keratin twice a year is $300, the time and emotional drama it spares me makes it worth it. In middle school, I used grocery ingredients to make masks that were messy. I lost sleep waking up to straighten my hair. I wasted money on drugstore products that claimed they could straighten out a Jewfro — or better yet, make your curls look good.

Something more powerful swayed me: the ingrained notion that straight hair is somehow inherently more attractive.

Summer Gershon is another senior girl who gets a keratin treatment twice a year.

“For me, there are different ways for people to feel confident and for me it was my hair,” Summer told me. “And I didn’t feel confident if my hair wasn’t straight or put together.”

But how much is the eye of the beholder affected by societal constructs? And if it is, then isn’t the beholder’s perception of beauty skewed?

Another friend of mine, senior Lily Nosrati, said she originally got keratin for the first time in middle school because her hair was “absolutely insane” and keratin made it easier to handle in the morning.

But now that she has been getting the treatment since eighth grade, her perception of what is “manageable hair” or “good hair” has changed.

“It has to keep being straighter and straighter, because that’s what manageable hair is,” said Lily.

“I’m almost hypocritical for saying this,” she said. “I would say don’t get a keratin unless you absolutely have to, because what I have now would be my younger self’s dream.”

Now, she idealizes straight hair. For senior pictures she had her hair professionally straightened. But she said she had never thought about it.

“Whenever I go to a party, every girl has straightened her hair,” she said. “That thought would never even cross my mind, because when you go to an event you’re supposed to dress up and look fancy, and this” — she grabs her hair, which is curly but not so frizzy from all the years of keratin — “is not that. I want to look nice, and to me, this hair is schleppy, puffy, poodle.”

Senior Elana Czuker said that she thinks there has been an increase in the straight hair standard — though she herself is taking a break.

“I wanted something new when I first started it,” said Elana.

“And now the novelty has worn off and I think I actually do look better with curly hair, even though I don’t like it,” she said. “It’s just frustrating because with keratin I can just brush it before bed, and wake up and be fine. Now I wake up with a Jewfro.”

For her senior photos, she went with voluminous vintage waves.

Every girl I know who has had her hair relaxed has a different perspective on it, but everyone I talked to said the why of it all was something that had never crossed their mind. They, like me, just always believed they needed to have manageable or straight hair, whether that made them more confident or beautiful or both.

My hatred for my curly hair stemmed from a book titled Franny B. Kranny, There’s a Bird in Your Hair! that my mom would love to read to me, because it resonated so much with both of us.

The story was about Franny B. Kranny, whose long, red, frizzy hair would get stuck in doors and refrigerators, took hours to detangle, and one day was even mistaken by a bird for a nest. Franny’s situation is made worse and more comical by her little sister, who has short, perfectly sleek, black hair.

Like Franny, my family often mocked my hair, telling me to cut it, comb it, wash it, do anything to it to “fix it.” I rebelliously did whatever I wanted with my hair. Even more uncanny was my little sister’s perfectly straight black hair.

Franny must cut and style her hair in a tight updo for a family reunion, but discovers a love for her hair regardless of style when the homeless bird makes itself at home in her locks. But then, she cuts her hair off and donates it to a local nest. Though the overall theme of the book is non-conformity, it still seemed to my child-self like cutting off or restraining frizzy hair was the better option.

These instances — of my friends and me getting keratin, “manageable” hair being the standard — of Franny B. Kranny — all boil down to one thing: straight hair is the standard at the moment.

Every time I walk into school after getting keratin, heads turn. I get compliments from people who normally wouldn’t even say hi to me while washing their hands in the bathroom. People just notice you more.

People claim they are against unrealistic beauty standards, and many people would say they do not support eurocentric beauty ideals, but truthfully they do. If they didn’t, really, they would tell me how much they love my hair on the days nearing the end of the effects of the keratin — or before I even had started getting the treatment.

It’s not just me. Whenever a girl at Shalhevet walks in having straightened her hair that morning, she gets a slew of compliments and questions about it from classmates.

My mom, too, claims she does not give into eurocentric standards of beauty. Yet she always straightens her hair when going to a business meeting.

I will still probably get another keratin treatment next April for my birthday. I will probably schedule it around whatever celebration I have for my 18th so I can look my best — which will mean having perfectly straight hair. I know it’s wrong, and that the feeling I have that I look better that way is false. In reality, I just look like someone with straight hair.

And when I’m old and my hair starts to thin out, I’ll probably laugh at myself for ever wishing I had anything but a big, bushy, curly Jewfro.