TWO BOILING POINTS OF VIEW: Is it kosher to read during davening?

By Eric Bazak and Noah Rothman

By Eric Bazak, Editor in Chief 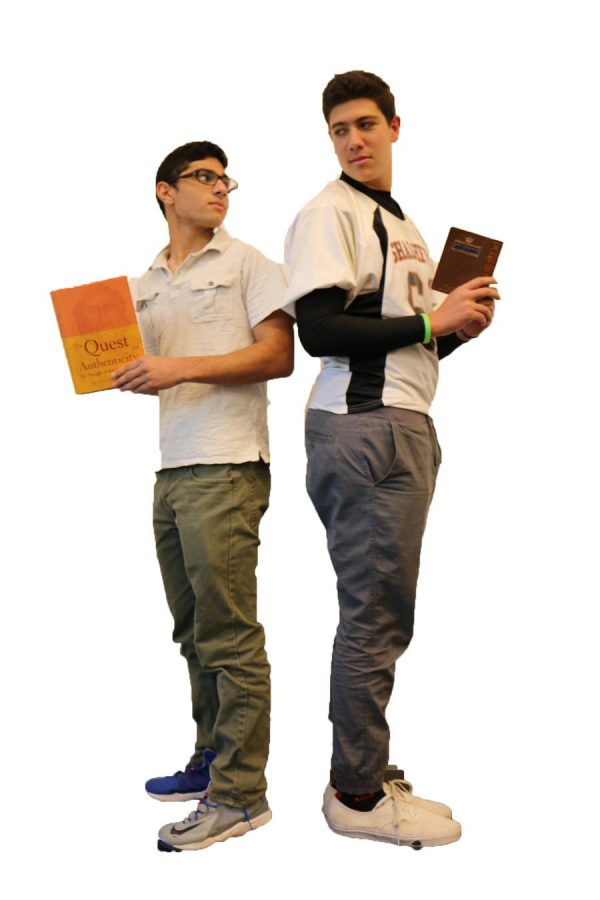 Yes: An ideal alternative for the disconnected

Flipping through the first pages of Quest for Authenticity: The Thought of Reb Simhah Bunim during Ashrei at first felt a bit strange. In most Modern Orthodox schools, if my Artscroll was closed and I was channeling out the sounds of the chazan to concentrate on a book about the Przysucha branch of Hasidism, I’d be doing it wrong.

But my initial wariness quickly faded once I saw how beneficial Shalhevet’s new policy — allowing students read Jewish books during davening — is for me and many other students.

Contrary to what some feared, this new policy — approved along with other davening innovations during out Just Community reorientation — does not lower our school’s overall religious observance or harm the spirit of prayer. It raises it, by removing the main source of interference: noise from students who choose not to daven.

This means the period between 9:05 and 9:40 a.m. can be more productive and meaningful for all those students who for whatever reason do not pray.

It also makes perfect sense for our school, where students are meant to find inspiration from within rather than teachers coercing them to connect.

Essentially, the new policy allows any student to spend davening reading an administration-approved book pertaining to Judaism. The approved books are historical, scholarly or prayer-related.  Boys are still required to put their tefillin on and everyone must stand when it is time to stand, but readers can be fully immersed in their book throughout all of davening.

Other davening innovations include a cellphone box at the front and a policy that asks the first students who enter the Beit Midrash to sit in the back rows, presumably since they are the students who are most likely to pray.

In some ways, the new policy isn’t really new. The policy at our school has always been that nobody is required to utter a single word of prayer. Shalhevet does not believe in forcing students to pray, since that leads to an artificial relationship to davening and God. In my opinion, better to have one day of truly meaningful prayer than 30 insincere ones. Everyone is obligated to be at davening, of course, in order to fulfill the mitzvah of tefillin (for boys), support the common good, and have the chance to experience those rare, transcendent tefilot.

But since the actual davening is not mandatory, many students, who either opt to never daven or are not in the mood to pray on a particular day, must sit quietly for 35 minutes straight. In the past, this has naturally led to increased amounts of talking during services, an eisur or violation we have all committed. When students converse during this time, moreover, they ultimately disrupt the flow of davening. Those davening in the back rows have difficulty keeping up with the chazan when students sitting beside them are exchanging thoughts about how the Lakers will do this year.

From a halachik perspective, the new policy is thus an improvement. First of all, it prevents the aveira (sin) of talking during tefilah.

This new policy is directed towards those who do not daven, a group I am  part of more than half the time. Nearly everyone would struggle sitting silently for so long everyday with nothing to pass the time. Reading a Judaic-pertinent book has absolutely saved me from the temptation of talking during davening.

Some may wonder about the halachik implications of students — especially a boy wearing tefillin —  rea+ding a book while everyone else is praying.  But I cannot fathom how reading a spiritual book would be viewed as halachikly worse than staring into space and twiddling one’s thumbs for half an hour, and I can objectively claim it is halachikly more favorable than talking.

For the individual, this option presents another means of being spiritually productive during this time. The permitted books are not class-related or necessarily the most fascinating reads, but they are intellectually stimulating and allow the reader to remain connected to Judaism during this interval of time.

I personally still say Shema and the Shmoneh Esreh, the two core prayers we say daily. I do not have to pick and choose between davening or reading, but can balance the two. Though others may feel differently, I feel my Shmoneh Esraeh is more meaningful now, as opposed to when I’d daven the entire time and feel a bit worn out by Shmoneh Esreh.

Now, with a significant dent made on this book, I no longer feel hesitant in tuning out the chazan for the first half of davening. It may not be what other Modern Orthodox schools would do, but since when has that deterred us at Shalhevet?

No:  Even though it’s hard, we have to pray

At this year’s very first Town Hall, after the Just Community sessions had adjourned, the Agenda Committee brought forth an idea for davening. The idea was that students would have the option, if they liked, to select a book pre-approved by the Administration and read it during davening, as an alternative to actually praying.

The plan was adopted and is now in force, but I personally oppose it. I understand trying to get kids to be connected to davening in any way possible, but taking a siddur out of someone’s hand is not the way to do it.

For me this is a tough stand to take, because I can see my 9th- and 10th-grade self pushing for an alternative to the normal way in which Jews have practiced Judaism for 3,000 years.

Those are also the expectations on all school-sponsored trips. On trips over Shabbat, students take part in all prayer services. Is the new reading policy something that Shalhevet is ready to expand to school trips? On the school-wide Shabbaton, will there be an issue if 35 kids are reading Lonely Man of Faith by Rav Soloveitchik? Or is that something that we are prepared to see – students no longer davening on Shabbat away from home, when we are supposed to be representing Modern Orthodox Jews in more public and unfamiliar places.

Male students are required to put on tefillin every day at school. Once you have your tefillin on, you are then supposed to at least say the Shema. I personally don’t think it is okay for boys to miss out on the basic mitzvah of saying tefillot and putting on tefillin, which is a commandment from the Torah itself.

If Shalhevet wanted to introduce a minyan where boys said the very basics of tefillah, then sat in a room for 30 minutes and read, that would be different. But entirely throwing out davening, even on a voluntary basis and even in favor of reading something religiously worthwhile, is not what a Modern Orthodox high school should be doing.

Now I am going to use an argument that is easy and used a lot, but makes sense here. When students sign up for Shalhevet, whether coming from never having heard the Aleph-Bet song or transferring out of MBY, they are choosing to attend an institution that prides itself on teaching what it means to be a Modern Orthodox Jew.  In short, that includes davening.

It is obviously okay to struggle within Judaism and it can be very tough to learn how to connect to one’s own prayer, but throwing out davening is not the way to solve that. I personally didn’t appreciate davening so much until I learned about it in the 11th-grade Lahav curriculum with Rabbi Stein. Maybe more education about davening is needed, or maybe the 11th-grade Lahav should be introduced in 9th grade, before we turn to allowing students to not daven during Shacharit.