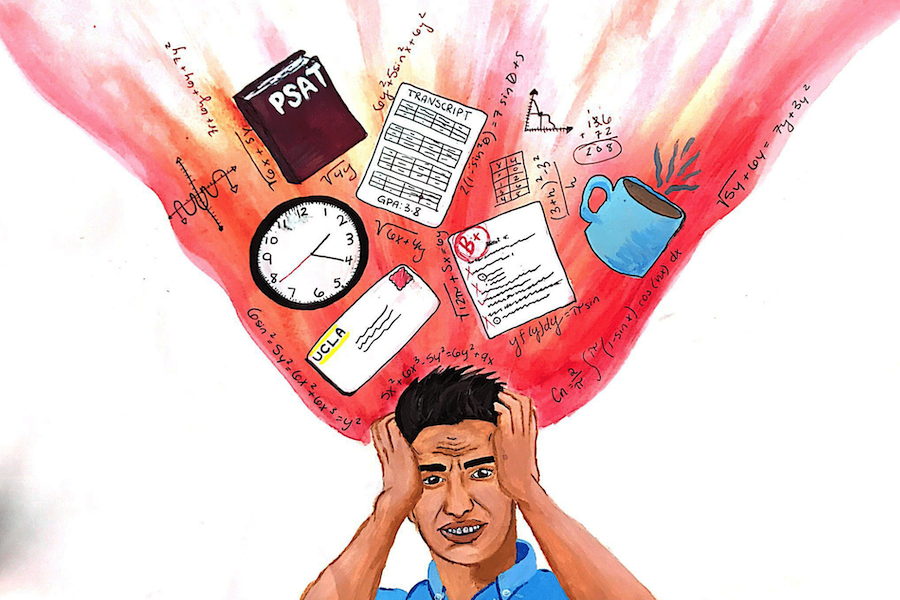 The magical madness that is math

It's key to so many other subjects, from biology to computer science, but it's different than most classes at Shalhevet. Students explore the beauty and the pain.

Although she sleeps just five hours the night before a math test — less than her normal of seven hours — studying late into the night makes junior Nicole Klausner feel good about the material before the test the next day.

“Once you really invest your time into it and then you do well on a test, like your stress is projected on a paper, it’s really valuable,” said Nicole.

Nicole’s experience is similar to that of the many other Shalhevet students who struggle with math. Even though math meets the same number of times as every other class, anxiety about it seems to consume many students, as nightly homework is assigned and concepts can be difficult or complex.

So what is it about math?  One thing that makes it different from other subjects at Shalhevet is it’s concreteness: there’s only one particular solution to a given question.

In history, there is room for analysis and open endings. When studying texts in literature, quotes are open for different interpretations and thoughts. In Tanakh, understanding of texts can be unique.

In math, with less room for individuality, there are fewer ways to feel successful.

“There’s alway kind of a right answer, there’s no interpretation,” said freshman Henry Fried. “You’re either right or wrong, and I think when you’re in a hard class that I’m in, it’s becoming stressful.”

In addition, teachers interviewed by the Boiling Point believe that math homework needs to be given every night for the subject to be mastered, making the classes more constantly front and center in students’ attention.

Perhaps ironically, they do that to make it easier.

“Math is the same thing. To understand math and to be good in math, you need practice too. And the only practice [that] can give you that is going to be homework.”

Teachers also think students are putting too much pressure on themselves to succeed, and that math is not always as complex as students perceive it to be. In other words, they think student anxiety itself may be making math harder.

Ms. Jennifer Kong, who teaches Algebra I, Geometry, and Pre-Calculus, said that since math is challenging and students want to get A’s, stress builds up.

“It feels like math is the subject they stress out about,” said Ms. Kong. “I think in general, they just want to get a good grade.”

Students complain about that stress, but at least some find it helpful.  Nicole said that she’s tired the morning of a test, but that the stress is worth it once you receive a good grade.

“I can usually run on a lack of sleep, which is like a bad habit, but it’s true,” Nicole said.

Students offer various reasons as to why math is hardest for them. Some say they are not as strong in math as they are in other subjects, some are strong in some parts of math but not in others. Some feel bound to struggle because it requires meticulousness and attention to detail.

Senior Talia Gill said math has been her hardest class all four years of high school.

“My strong suit is more geared towards literary subjects, so I have an easier time with that kind of stuff and I have to try harder in math,” Talia said.

Others feel overwhelmed by the pace of math, or that their class demands too much time for homework and studying.

“You can never catch a break — you always have homework due,” said sophomore Hannah Berman.

SAS Biology teacher Mr. Pavel Lieb says that understanding math is a balance between the way one is nurtured and one’s genetics. For example, Shalhevet students spend more time in religion and humanities classes than in science and math.

[There’s an] acceptable idea that it’s hard, but it’s not. People find math to be hard because they can’t put the struggle behind them. ”

“There’s probably some sort of a neuro-cognitive basis to it as well,” said Mr. Lieb. “When we talk about complicated math, which is like advanced math, then some people definitely have more talents and abilities than others.”

According to a 2015 Boston Globe article titled “This Is Your Brain on Math,” scientists at Stanford University found that students who find math easy have different “brain geography” from those who have to work harder at it — in particular, more surface area, or cortex, and more connections among regions.

More use — in this case, more homework — develops more connections.

Yet even students with math talent find it stressful. Junior Jacqueline Englanoff — who loves math and is good at it — said the subject doesn’t cause anxiety but assessments do.

“Math is definitely something I see myself having a future in,” said Jacqueline. “I find math fascinating, which is something that I feel like most people don’t feel.

Jacqueline is in Pre-Calculus Honors.

“Being placed in this class has allowed me to pursue that passion,” she said.

She has counted nine tests since September, each one of which, she says, created apprehension in the classroom.

“Tests have a lot of anticipation — leading up to it,” said Jacqueline. “It creates an environment of stress and of anxiety and that can be hard.”

“Our department’s frequency and volume is in a certain way trying to mitigate the fact that if you miss something, then you can’t speak competently when we introduce something else.”

Still, quantity of homework is a particular gripe of students. Students complain that math homework is not only constant but lengthy, and can take up large portions of their evenings on a daily basis.

Math Department Chair and Director of Curriculum and Instruction Dr. William Walton said that he understands that students take a lot of classes, so he “tries to pick a representative number of problems” to give.

He said his goal is to have homework be an average of 30 to 40 minutes, and if it takes longer, students should see him.

“Something is going very wrong if it’s actually taking you a long time,” Dr. Walton said.

But students of all teachers said they spend more time than that on math.

Freshman Josh Weissman said that each homework assignment takes him around an hour.

Evan Rubel has a significant amount of work each night.

“On average, math homework takes me about an hour to an hour and a half,” said Evan.

Sophomore Joey Blumofe said a single assignment can take him up to four hours.

“It usually takes me two to four hours,” said Joey.

Ms. Kong thinks says her assignments are not excessive, and that the problem is just that the subject is hard.

“Compared to all other schools or compared to what I grew up with, this is not a lot of homework,” said Ms. Kong, who grew up in Hong Kong.

“For a lot of students, math is not an easy subject,” Ms. Kong said. “That is why they’re stressed out.”

Stress itself is a complicated subject. Dr. Walton said that not being good at arithmetic and stress around math are not the same thing, and that students tend to conflate the two. For example, doing poorly on a test does not mean they can’t succeed in math or that math is too hard for them.

“Nothing we teach you is impossible,” said Dr. Walton. “Every discipline tries to make the student love it.”

“[There’s an] acceptable idea that it’s hard, but it’s not,” he said. “People find math to be hard because they can’t put the struggle behind them.”

He also said that failing a test or quiz doesn’t define who a person is. He said that students are “abnormally stressed around all assessments.”

“Your grade on one test is not going to prevent you from going to college,” said Dr. Walton. “When you go off to college, we want you to feel like you [can] major in anything.”

He said the purpose of homework was to “let people struggle with no stress” — in other words, to build up knowledge without worrying about how it reflects on your ability in a grade.

I’ve really been able to see the beauty of math and uncover the underlying unison and order that exists within all of mathematics.”

“The more practice you do, your brain is formed in the way you could do it,” he said. “No one’s going to fail you for that.  People’s goal is to give enough homework for reinforcement.”

Mrs. Gidanian believes that the length of homework should vary based on the concept being taught, and should be different each night.  She said that for students to truly master math, they need to practice problems over and over again.

When there are trips or things going in the school, she said she makes homework shorter.

“Students always complain that [they] have other homework to complete per night but when I talk to them… they don’t bring up the other homework, they just bring extra-curricular activities that they have,” she said.

This may reflect the fact that other subjects and even co-curriculars are irregular, while math is constant.  From history projects to drama productions or basketball, other things in high school ebb and flow. But math — even for those who love it — keeps on going.

For students who love math, math has its own rewards — a kind of beauty that connects them to truths about the universe, or a beautiful puzzle that creates a practical understanding that can be applied outside of the classroom.

“I love math,” said junior Evan Rubel. “I think that throughout my time at Shalhevet, especially in my math courses that I’ve taken, I’ve really been able to see the beauty of math and uncover the underlying unison and order that exists within all of mathematics.”

Junior Kikuyo Shaw says that expression and interpretation allow math to be beautiful.

“The way that we express things mathematically and the way that we can come to logical conclusions about nearly all aspects of our life is really cool,” Kikuyo said.

Kikuyo said that math inherently pushes a student to think outside of the box.

“If you think about math, like what math really is, it’s kind of just like thinking as creatively as possible within a defined set of limits,” she explained.

“I think it’s really cool to tie together like what I learn in class to things I can see, mostly geometry,” said Jamie.

Junior Avital Jacobson said that math is amazing since it has existence, and our role is to see it.

“It exists, and it just comes together when you learn it, and it’s really cool,” Avital said.

Not everyone sees it this way. But Ms. Kong said that like everything else Shalhevet students do, math expands thinking in a unique way — even though, or perhaps because, they have to work so hard to do it.