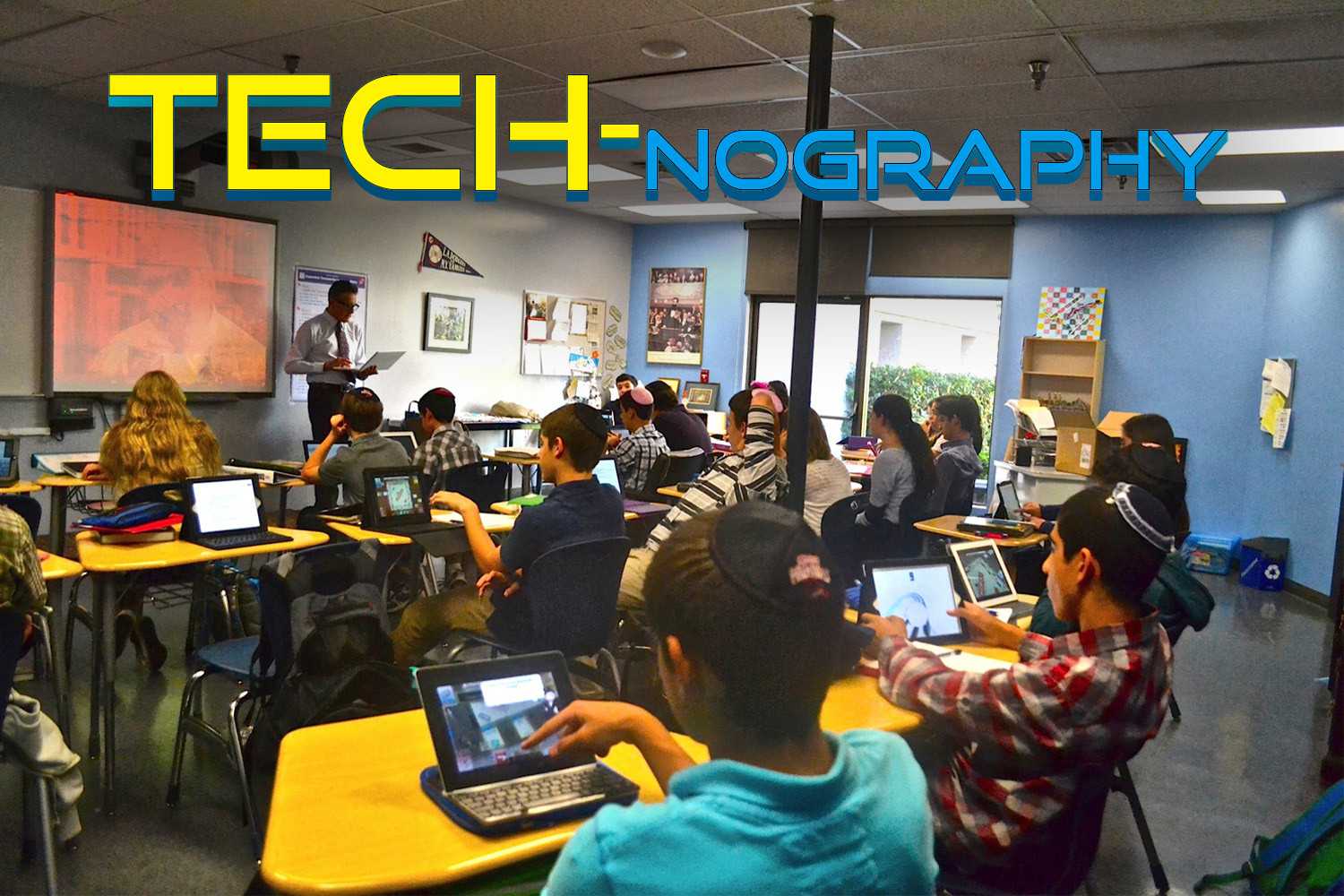 TECH-NOGRAPHY: How students and faculty are handling the geography of tech

Shalhevet’s new iPad program has transformed classes for both sophomores and freshmen into intricate and technologically advanced courses — as well as an opportunity to play the latest games and explore apps during class. 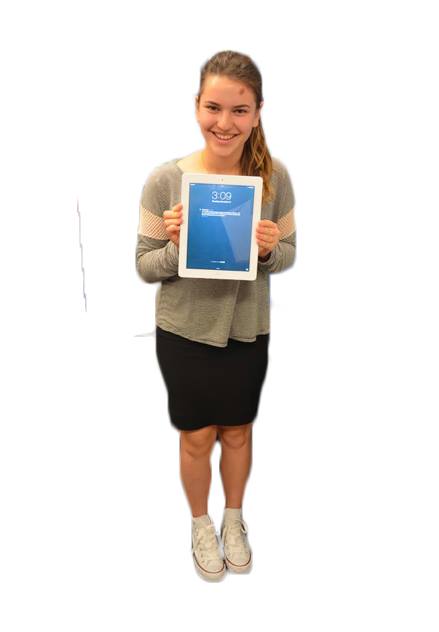 This year, the underclassmen are required to have iPads with them the whole day, and assumed to be on Pages, Notability or another app installed on everyone’s devices by the school student tech-team back in August.

The result has been a learning environment which has many new different techniques and options. Teachers have been given a variety of new ways to incorporate technology to enhance their classes.

“By in large, I am pleased with it, but I think it is very early to make predictions about success,” said Mr. Jason Feld, the Coordinator of Educational Technology.

“I think that teachers are a lot like students — everyone learns at their own pace,” said Mr. Feld. “So we have early adopters doing more sophisticated work, and some teachers doing the basics. Technology is not going away, it is a process.”

Among new attributes that the iPad brings is the new interactive Schoology app, which allows students easier and quicker access to all of their class assignments, documents and grades.

But at least for the first few months of the year, such benefits have come with a price: The iPad comes with many potential distractions.

In the majority of freshman and sophomore classes, many students have been able to play games and access the internet. A Boiling Point investigation found that in nearly every course which permits the use of iPads during class, there have been students not paying attention, particularly when teachers are giving informtion that students perceive as not being relevant to a test.

Freshmen and sophomores say that the classes easiest to ignore and play games in are the ones that involve taking notes, which teachers post on to Schoology anyways. Furthermore, despite some teachers occasionally catching students who are playing on their iPads, there are very minimal consequences for misusing the device aside from being asked to stop by the teacher. The administration has yet to create any form of punishment authorized for every class.

“That is a legitimate discussion,” Mr. Feld said. “I don’t think there is a solution.

“We could take iPads away, but really, students must take ownership, and that is part of what Shalhevet has always been about,” he said. “I know in my class when someone isn’t engaged and taking notes, any good teacher knows who is engaged with or without technology.”

Even before the school year began, the administration anticipated students abusing their new iPads. Students signed a contract prohibiting the use of any games throughout school hours, not just during class.

The reason the iPad is so distracting is the fact that the iPad is virtually a larger version of an iPhone: there is an App Store, iMessage, and access to the Internet. — meaning that a student can easily be playing a game, going on Facebook, or even texting a friend all during the same class.

During a week of observation by The Boiling Point, more than a whole row of five students was playing the same, popular game of “Airplane” during as 10th Grade English lecture about The Crucible.

Other students prefer to do online shopping during class. Looking for stylish clothes does not require the same concentration that games do, lowering the chance of a History teacher noticing that someone is on Amazon rather than Pages.

Students were seen waiting for the right moment to check the score of a basketball game during Biology or to test their trivia knowledge while playing Jeopardy in Jewish History class.

Sophomore Noah Rothman admitted that he was able to get away with watching a movie during a Hebrew class.

“I was able to watch a movie during class,” Noah said. “[The teacher] talks in front of the class and I sit in the back. She thinks I was using the iPad to go on the Neta book.” 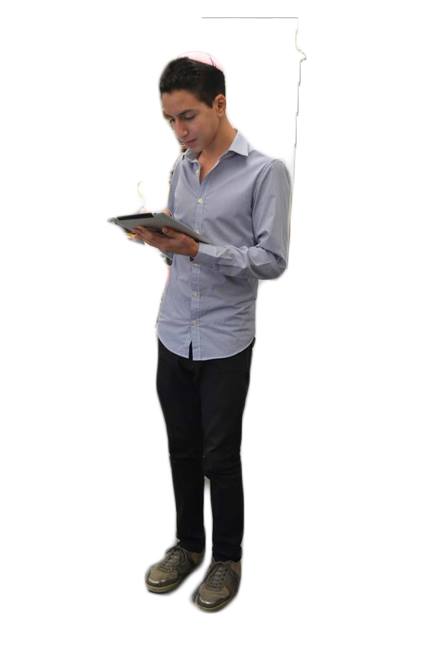 An anonymous freshman said that most of the freshmen class play games on their iPads.

“The games I play are mostly Impossible Road and Monopoly,” the freshman said. “You don’t even have to do much to hide it. The teachers are in the front of the classrooms and they just don’t notice. The only classes that I’m not able to get away with it are Hebrew, Music, and Math. ”

Those three particular classes, the freshman explained, do not actually use the iPads during class.

According to General Studies Principal Mr. Roy Danovitch, the distraction will not be such a huge concern if students genuinely respect the class, which is what the teacher must always try to do.

“My argument is that if a class is engaging, a teacher does not have to establish arbitrary or coercive rules to control for attention,” Mr. Danovitch said. “Students misuse their iPads less frequently in classrooms that are engaging, serious and dynamic. Usually, when students respect the class environment, they behave respectfully.”

But it may be that students just do not use the devices in classrooms where they are not allowed.

Music teacher Mrs. Joelle Keene said that the best way to get student’s’ attention is to limit how often the iPad is out.

Mrs. Keene said students in her class use the iPads only for Listening Journals, in-class assignments when students are writing about what’s she’s playing on the Bose speakers. For note-taking, the iPads are put away.

“If the 9th grade is saying that my class is one of the only ones when they are not using their iPads, it is because I don’t allow it,” Mrs. Keene said.

She said she finds it hard to resist an incoming text message or checking her e-mail when her computer is open.

“I myself find electronic communication irresistible,” she said, adding, “I think that the iPad in school can be a stumbling block before the blind.”

The price for limiting the use of the iPad, of course, is cutting off access to its productive aspects. The huge investment Shalhevet made into this project was because of all the ways it makes school easier for everyone, and many students agree.

“It really shows the trust that the administration has for the students,” freshman Lindsay Schacht said. “Using technology improves our learning and makes it really easy.”

Freshman Aron Cohen loves how convenient the iPad is.

“I like it because it is lighter and smaller, so it’s pretty easy to carry around,” freshman Aron Cohen said. “I also like it because it keeps me up to date with homework instead of having to write it down. Now everything is automatic.”

“The iPad is basically all the notebooks and tools we need wrapped up in one really expensive toolbox,” freshman Yonatan Khalil said.

In Ms. Suzanne Halloran’s Honors Geometry class, students take a four-question quiz on Schoology every meeting.  Since it can be graded instantaneously, both teacher and students know immediately which concepts need to be reviewed or retaught. Students also know their grades right away.

Although some classes depend on their iPads more than others, the majority of teachers try to incorporate the system into their curriculum somehow. Notebooks have been replaced with Notability, an app students bought in the beginning of the year which allows students to divide and organize all their notes for most classes. 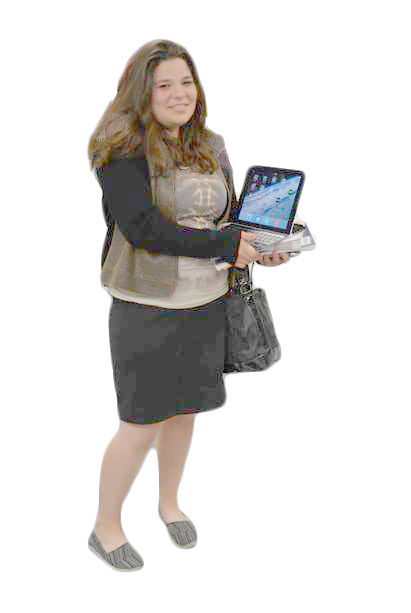 The same app is also used to attach any file teachers have posted in Schoology. The majority of underclassmen now take notes from either Notability or Pages instead of writing them down on paper.

Visual learners can also use Inspiration, an app which enables students to create diagrams and charts, as well as organizing outlines.

“It’s really good for classes like Gemara,” sophomore Nicole Newman said. “I could put in all of the ideas we learnt into one map and it connects all of ideas to one, so it’s very useful.”

Furthermore, with everything online and backed up through the iCloud and Google Drive, students cannot lose their notes or even have to carry heavy objects around with them such as binders. Now, the most important material needed to bring to class is the light and portable iPad.

“Last year, I had to go from my locker to my classes in between every single class,” sophomore Daniel Soroudi said. “This year, the only thing I need to take to most classes is my iPad. That’s why it’s so convenient.”

Mr. Danovitch said misuse of iPads will be eradicated soon enough, once teachers find a way to prevent students from easily disengaging from class.

“What students do with their iPads is what our generation did with doodling,” Mr. Danovitch said. “It doesn’t always reflect poorly on a particular class. I know for a fact there are a lot of stellar teachers and stellar classrooms where students are misusing their iPad because it’s so easy to.”

The first Town Hall topic on Oct. 3 directed a lot of attention to this problem. Teachers and students alike argued that exploiting the iPads by playing games only hurt those students themselves.

Nevertheless, weeks later the problem persists. Among the teachers who addressed students about neglecting the iPad’s purpose that day was Ms. Berkey.

“My biggest concern is how to use it effectively in class to make sure people are not using it for the wrong reasons,” she said in an interview later. “So what I’ve tried to do is figure out an in-between when I put out a lecture outline. But the way I use it, I don’t feel like it has something that we could not have done before, so I’m torn.”

Mr. Feld said time will help with this.

“I think over time we are going to see more adoption of apps and educational technology by the faculty,” he said. “But that will take some time.”