In honor of their graduation, the Boiling Point profiles four members of the class of 2014. Click on links at the bottom of the story for three more. 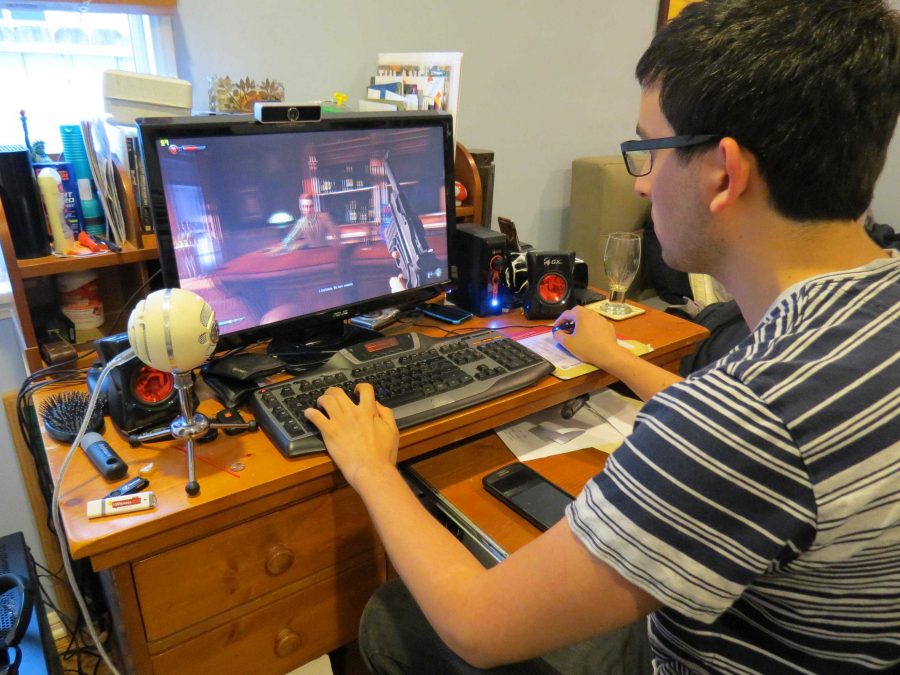 It’s lunchtime, but senior Paul Merrit has no interest in strolling the hallways or lounging in the lunch area. Illuminated by a projector’s glare on the whiteboard in Room 23, he sits on the edge of a blue plastic chair, his feet planted firmly on the ground. On either side of him are two friends, equally engaged.

Paul is an ardent game player who values the personal involvement in video gaming that is impossible in movies or TV.  His favorite game is Legend of Zelda: The Wind Waker. He appreciates its setting on a cluster of tropical islands in the “Great Sea,” and what he calls its “unique art style and open-endedness.”

“The first time I played this game was the first time I’d been able to explore an expansive world and get lost in its beauty,” Paul said.

Ever since Paul’s mom surprised him with a Gameboy on his fifth birthday, he has had an unyielding passion for anything technological, whether it be editing the Boiling Point’s Fire-Take podcasts or producing videos. He is also co-founder of “The Freezing Point,” Shalhevet’s fake, gently humorous news source, and has been involved in Drama through acting, directing and various technical jobs.

His passion for technology grew as he became increasingly exposed to the digital world as a child. In elementary school,  a cousin who was a computer science prodigy shared his interest in computer coding. In middle school, Paul played World of Warcraft with friends he made online.

Then in high school, Paul discovered his dream. After voice-acting a small modification in a game called The Elder Scrolls V,  Skyrim,  he decided to make that his so-called “unrealistic” professional aspiration.

“Voice acting adds a much needed layer of immersion and atmosphere to any game and its characters,” Paul said.

While video games are his inspiration — particularly Red Dead Redemption, known for it’s well-voiced characters with unique personalities — Paul’s first step towards fulfilling his dream will be taking computer science and game design courses at NYU, where he plans to harness the tools he learns to further involve himself in technology.

The bell rings, and Paul presses the off button on his control as the classroom lights flicker on, a teacher standing in the doorway. He blinks, the engaging world of Super Smash Bros. still dancing before his eyes.  He is left with only his unique passion and his dream to be a voice-actor as he flings on his backpack and walks to his next class.