At the Academy Museum, Jews are missing from the world of Motion Pictures. Here’s a look at what’s left out. 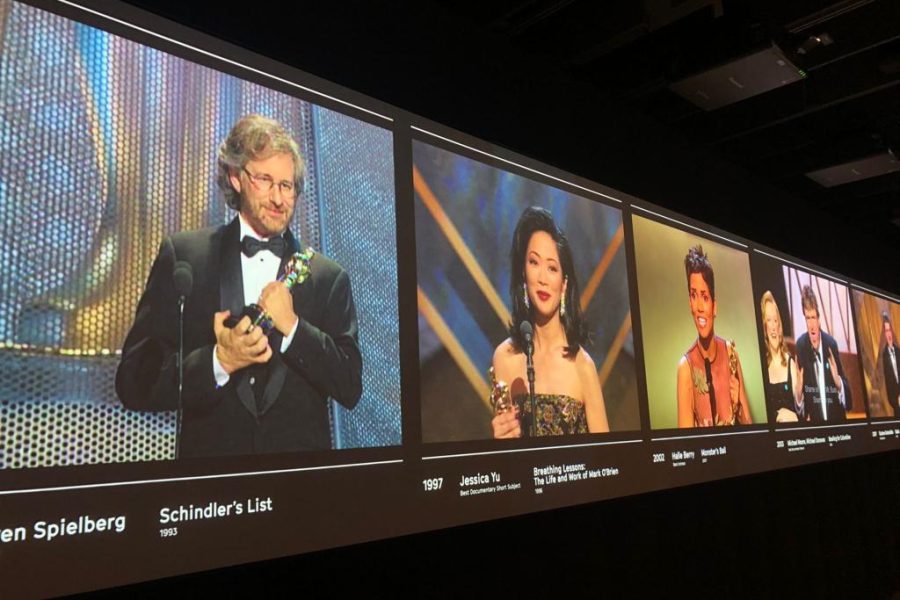 Gallery|5 Photos
BP Photo by Nettie Wolkind
WALL: In the Stories of Cinema exhibit, videos of Oscar acceptance speeches play one by one. Steven Spielberg’s speech when he won Best Director for Schindler’s List is the museum’s only mention of him.

The Academy Museum of Motion Pictures displays and discusses artists of many races, religions, ethnicities, and causes, and their respective roles in the world of cinema. But Jews – who many consider to be the among the most significant founders of Hollywood – are missing.

The $482 million, Renzo Piano-designed museum opened to the public Sept. 30 with what promised to be a comprehensive, imaginative, Hollywood-level take on movies, a place that would shine a light on an industry that is loved the world over and that generates endless fandom and curiosity. As expected, it focuses on the film industry, its history, and the ways of filmmaking, in particular going beyond acting to the behind-the-scenes arts of of cinema, sound, costumes, backdrops and more.

In hallways and exhibitions full of props, scripts, photographs and outfits, viewers see highlights from movies like Real Women Have Curves, about a Mexican-American family in Boyle Heights produced by Latinx director, Patricia Cardoso.

Similarly presented are the Asian-American actor and martial arts master, Bruce Lee, Emmanuel Lubezki, a Mexican cinematographer; Oscar Micheaux, a producer who catered to Black audiences; Pedro Almodóvar, an Oscar-winning 1990s director from Spain; and the pioneering Black director Spike Lee. There’s an exhibition dedicated to the history of Black cinema from 1898 through 1971 and Blacks’ contributed to Hollywood.

Missing are Lew Wasserman, the legendary talent agent; Samuel Goldwyn, Irving Thalberg and Louis B. Mayer, who were film producers and founding contributors to Metro-Goldwyn-Mayer…”

There’s also a small exhibit called the Social Impact Gallery, describing the efforts of Black Lives Matter, #MeToo, labor relations and climate change, and how each movement played a part in the role of cinema.

A costume room features outfits found in popular movies, including a dress from La La Land and an outfit from Crazy Rich Asians, and a room focused on The Wizard of Oz and Judy Garland’s dresses, shoes and audition process.

The end of the visit features a view of LA from the top of the David Geffen Theater.

No one could dispute that, like that view, an important  purpose of a museum is to widen the lens through which viewers see a subject. The Academy Museum does this with thoroughness and thought.

Missing, however, are Lew Wasserman, the legendary talent agent, Samuel Goldwyn, Irving Thalberg and Louis B. Mayer, who were film producers and founding contributors to Metro-Goldwyn-Mayer, the American media company, motion picture studios, the Warners, who established Warner Bros., one of the most influential film companies ever and parent constituent of Time Warner, and so many more — many of them Jewish.

And Carl Laemmle, the founder of Universal Pictures. George Cukor, the Jewish-American director of Little Women and My Fair Lady.  Woody Allen, a Jewish-American director and Academy-Award winner for classics like Manhattan and Annie Hall. The Coen Brothers, who wrote, directed and produced A Serious Man and Sophie’s Choice. Cecil B. DeMille — born Jewish and raised Protestant — directed The Ten Commandments and Cleopatra.

There is only one reference to a Jewish person’s contribution: Steven Spielberg is one of a series of videos that run one after another, in his case showing his acceptance speech for Best Director for Schindler’s List. And an animatronic E.T. that was used for the filming of E.T., The Extra Terrestrial, produced and directed by Spielberg, is on display.

Bruce, the shark from Jaws, also directed by Spielberg, hangs from the ceiling above the museum’s main stairwell.

Beyond those, there is virtually no sign of Jewish engagement in an industry that Jews founded, making the Academy Museum of Motion Pictures a bit like an airplane museum that doesn’t mention the Wright Brothers.

What’s missing is the founding story of the movie industry, for Jews – and Los Angeles is the second-largest Jewish community outside of Israel – and anyone else who might be wondering how Hollywood from the beginning made films the whole world wanted to see.

Are the contributions of  Goldwyn, Wasserman, the Warners, Laemmle, Cukor, Thalberg, and others necessary to the story of Hollywood?

The Boiling Point asked two teachers with Hollywood expertise to describe Jewish contributions to the film industry. Read their words and decide for yourself.

CORRECTION: In an earlier version of this post, the director of Sunset Blvd. was misidentified. It was Billy Wilder, not Cecil B. DeMille. The Boiling Point regrets the error. 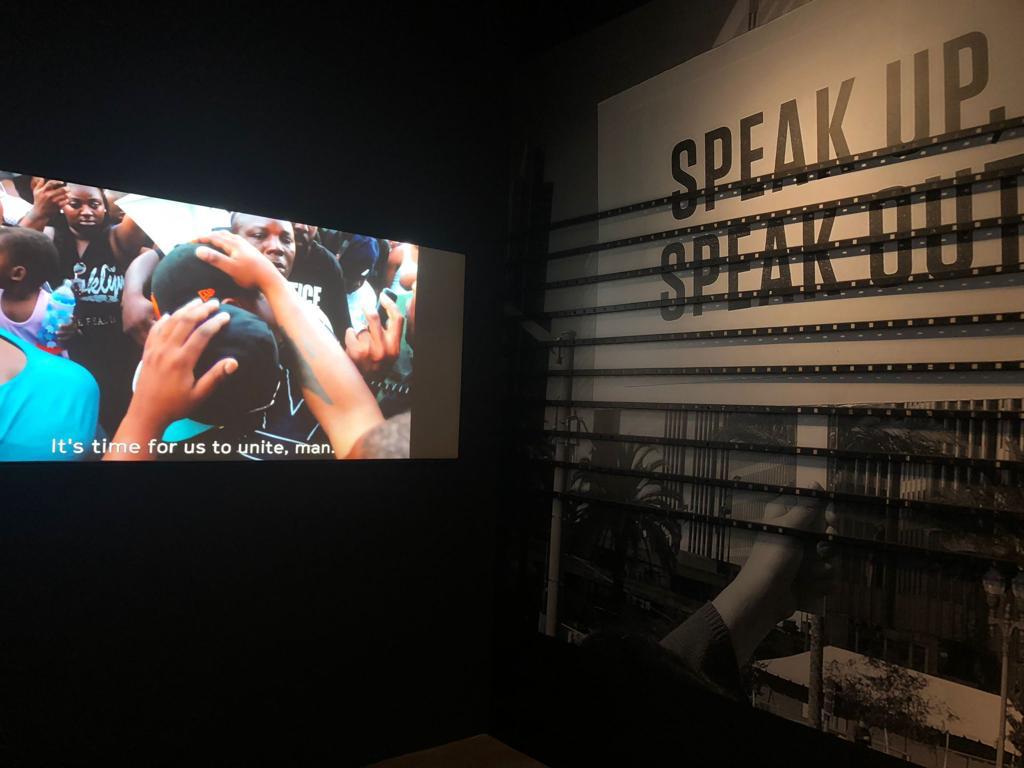 OUTREACH: The Wanda Gallery, which explores film history gallery, describes the impact of people of color in filmmaking.

A story of immigrants

Ms. Michelle Crincoli is the film and creative writing teacher at Shalhevet and General Studies facilitator at Shalhevet Scottsdale.

BOILING POINT: What do you see as having been the role of Jewish creators, producers, writers, agents, and other talent in building the motion picture industry we call Hollywood?

MS. MICHELLE CRINCOLI: I really think the really cool aspect from the film history point of view when it comes to the Jewish community really is the immigrant story. It’s the people who came here from another country. I think like Samuel Goldwyn, he was one of the big producers back in the day, a Jewish immigrant. He basically is one of the founders of Hollywood. And it’s really the immigrant story, it’s the American story, and I think that’s really cool.

Jewish people were the founding of Hollywood — these people who came from other countries, and basically started an industry from scratch.”

Also, when you think of almost like Jewish films, like there are mostly no overt Jewish films, but if you look at a film like Dirty Dancing –– what a great example of a film about Jewish culture, but it isn’t a Jewish film. So for me, those contributions are what are really important, and specifically that immigrant story: people coming to this country in the 1920s, some of them fleeing Europe, and kind of starting some of them garment working, and then starting this film industry that people really don’t want to be a part of in the beginning. And they created this community — and all of a sudden, just starting this from scratch, this business that today is obviously part of all of our lives.

So I think that’s it — that angle of the immigrant story and the true American dream story is written all over the Jewish story connected to film. Of course, Jewish people were the founding of Hollywood. These people who came from other countries, and basically started an industry from scratch.

I think a lot of the Jewish artists were part of vaudeville, which was thought of at that time as kind of cheap, and no one wanted anything to do with it. And those people transferred their talent there into filmmaking, and obviously film history as we’re here now.

BP: In your mind, what are the top five Jewish film contributions to Hollywood?

MC: Dirty Dancing is a quintessential Jewish film, without it being “this is a Jewish film!” But I think it’s more the directors, like Spielberg. Someone like Steven Spielberg is amazing at not only Jewish film, but bringing the history to life. Spielberg’s movie Amistad [about a slave ship bringing Blacks to America] was probably one of the only movies that actually showed the slave ships. We have the trope of the plantation worker, but to see what actually happened to African slaves when they came over is heartbreaking — like we don’t see that. So his contribution is one to shine a light on history for film. 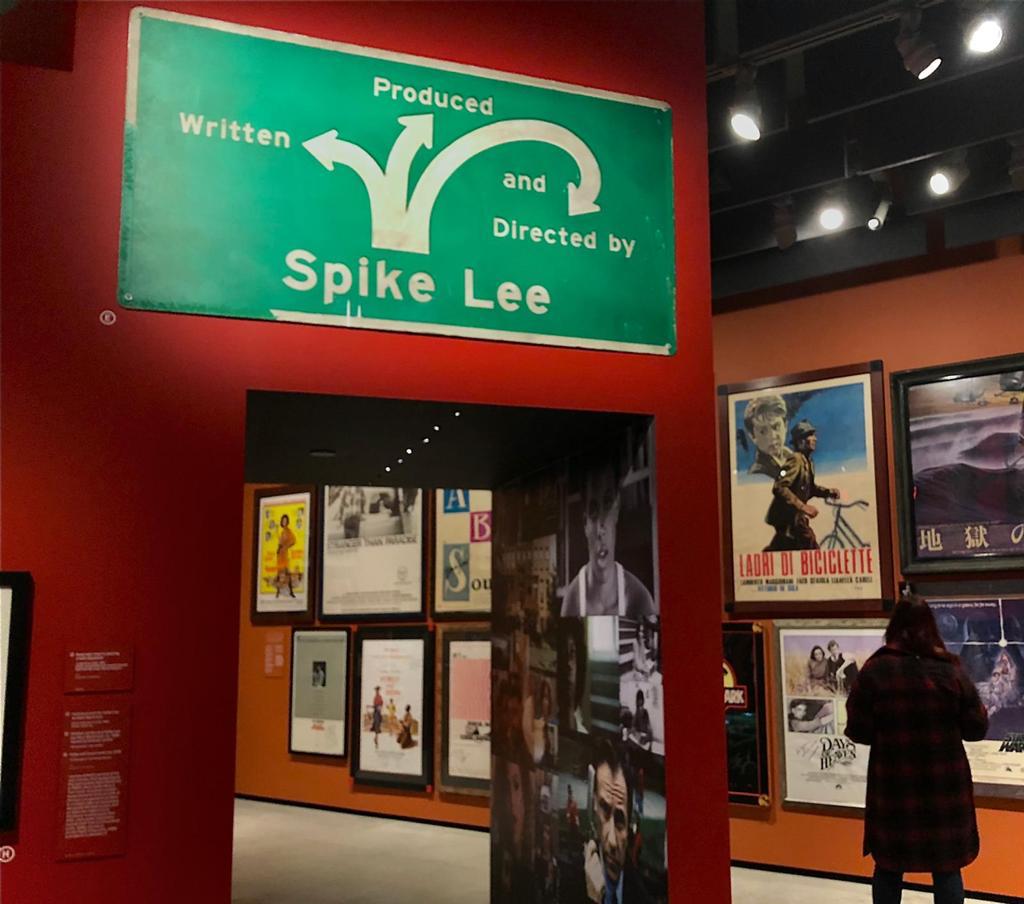 CENTERPIECE: In “The Art of Cinema” exhibit – which spans most of three floors – a temporary mini-exhibit is dedicated to pioneering director Spike Lee.

Integral to the founding

Mr. David Diamond taught the senior Screenwriting class at Shalhevet from 2018 to 2021. His first produced credit was in 2000 when he wrote The Family Man, starring Nicolas Cage and Tea Leoni, which won multiple awards. Mr. Diamond has been professionally writing since 1994.

BOILING POINT:  What do you see as having been the role of Jewish creators, producers, writers, agents, and other talent in building the motion picture industry we call Hollywood?

MR. DAVID DIAMOND: Jews were integral to the founding of all the major studios. You know, the Goldwyns, and the Warners, and the Langleys and Irving Thalberg, and the list goes on and on. It’s hard to imagine that any of the studios that we know today would be standing without them. That was just at the beginning.

And then when you look at the agents, you know, from the really famous old-time agents, like Swifty Lazar and Lew Wasserman, these were icons, they were larger than life figures in the history of Hollywood and trained generations of agents after them. And the writers, the producers, you look at the Epstein Brothers who wrote Casablanca. And Spielberg, obviously. Names we all know. It’s hard to imagine Hollywood without Jews. Except in front of the camera!

BP: Who do you think are the eight or so most important Jewish contributors to this – the great Jewish legends?

DD: I think that there were the Jews who made Hollywood what it was in the beginning, who were legendary. I do think Lew Wasserman in his days, first at MCA and then at Universal, was a giant. He was absolutely a giant. And then there’s a direct line from Lew Wasserman to Spielberg, who’s the giant of our era, the giant among the Jews.

These were icons, they were larger than life figures in the history of Hollywood and trained generations of agents after them.”

BP: In your mind, what are the top five Jewish film contributions?

Fiddler on the Roof! There are others with prominent Jewish characters and story elements–The Producers, the Mel Brooks movie from 1967. Annie Hall. And the Coen Brothers made A Serious Man. Sophie’s Choice. And let’s not forget You Don’t Mess With The Zohan. But it’s much easier to find Jewish filmmakers and executives than it is to find Jewish content for mainstream audiences.