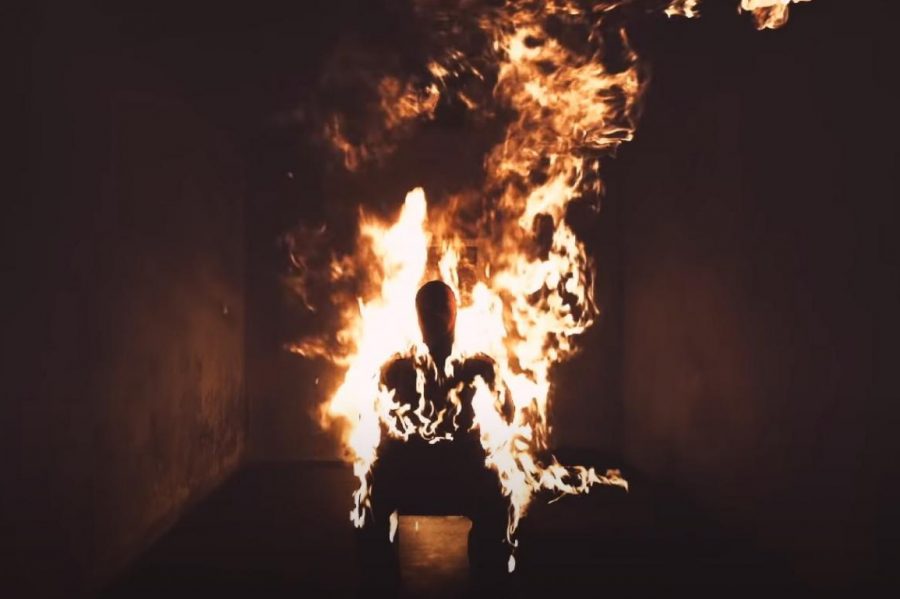 REBIRTH: A screenshot of the music video for Kanye West’s song “Come To Life,” one of many songs on the theme of redemption in his new album, Donda.

Worth the wait, Kanye West’s Donda shares every sort of emotion

Kayne West’s Donda is a tribute to his mother and best friend, Donda West, who died after surgery in 2007, so he wanted this album to be special. That meant leaving no room for error, which caused delays and a ton of suspense. The album soared to the top of the charts the minute it dropped.

Still, hype aside, Donda can be looked at through lenses of what people care about — ambience, production, lyrics and so on — and though I’m a huge fan, this is an attempt to be objective in each of those areas. Spoiler alert: I give Donda  an 8.7 out of 10 overall — even though I think it deserves to be named Album of the Year.

Ambience – 10/10: Donda emits a certain feeling that pulls in the listener in almost every song without ever feeling repetitive or dry. Kanye creates a euphoric and heavenly feeling throughout, and songs like “Hurricane,” “Moon” and others allow listeners to feel as if they are floating.

In “Moon,” Kanye stacks the voices of both the featured artist, Don Toliver, and himself and adds an echo; the echo makes it feel like you are hearing the song in a huge open space — sort of like heaven, or like singing in an empty parking lot. To their voices, Kanye adds only a soft electric guitar which is subtle yet affecting. Similar to the synth-heavy, R&B hit song “Slow Dancing In the Dark” by Joji, “Moon” hugs the listener with its echoes and soft tone.

Every feature on Donda absolutely slaps and every artist seemed to match perfectly with his song.”

Production – 9.5/10: Kanye has been a producer longer than he’s been a rapper and he is immensely skilled in this art. The production on this album is through the roof, using a mix of samples, choral music and modern-day trap music to create a coherent sound.

Kanye isn’t scared of failure or trying new things, and this time he’s given his album a more trap sound — computer-synthesized drums with complicated hi-hat patterns — where an album like Graduation might be more hip-hop-like. This one feels like a mix of Kanye’s previous albums The Life of Pablo, Ye, and Jesus is King, but still it feels new.

No song ever feels too convoluted or simple, because he implements the perfect amount of everything in every song.

Writing (Lyrics) – 8/10: An 8 for the sole reason that a lot of the songs have minimal wordage compared to Kanye’s usual amount, but that’s not to say what’s there isn’t great. There is a story to the album (granted it is difficult to notice) —  the first half talks about his struggles with losing his mother and how he was going down a dark path, and the second is his redemption and his rise back up both spiritually and physically. Once again Kanye breaks the status quo and raps about God and family.

Aside from the overall story, there are a few songs with particularly phenomenal lyrics and writing that have stories of their own. One example is “Jesus Lord,” which talks about the struggles of a broken family living in a broken neighborhood —

— which later gets into the story of Larry Hoover, a man who was sentenced to six lifetimes in prison for whose release Kanye advocated. Kanye has always been very religious and Donda keeps that trend going.

Kanye creates a spectacle of production and once again knocks it out of the park in almost every category, making you feel every sort of emotion.”

Length – 6.5/10: Self-explanatory — the album runs for one hour and 50 minutes, with 27 songs including four two-parters.

As much as I enjoyed it, it did feel a bit long. Being a big fan of Kanye, I took the time to sit down and listen through it, but the average listener would find it too long to try.  Still, I never felt as if the album overstayed its welcome, so a 6.5 and not a 6.

Features (Featured Artists) – 10/10. Every feature on Donda absolutely slaps and every artist seemed to match perfectly with his song. With artists like Playboi Carti, Don Toliver, Jay-Z, The Weeknd, Kid Cudi, there were a few repeaters yet they never sounded the same. All the features have their own individual sound. Features have always felt like stamps to me — a way for an artist to leave a mark on the music but not take the spotlight.

Overall – 8.7/10. Not a 9 out of 10, because this is an album that needs to marinate to be truly appreciated. Every time I listen to Donda, it gets better to me. With such a powerful feeling and message, it allowed me to immerse myself in the music. I immediately fell in love with it, but I decided to give it an 8.7.

I can understand why many people find this album to not be great, or to be “mid,” due to its distinct style and length. If you do not like alternative R&B, gospel and trap, then it makes sense to struggle with Donda since so many of the songs use those sounds.

On the other hand, Kanye creates a spectacle of production and once again knocks it out of the park in almost every category, making you feel every sort of emotion. Kanye’s love letter to his late mother is a phenomenal album that was worth its many delays, and is in my opinion Album Of The Year.

Don’t just take my word for it though, listen to it for yourself.