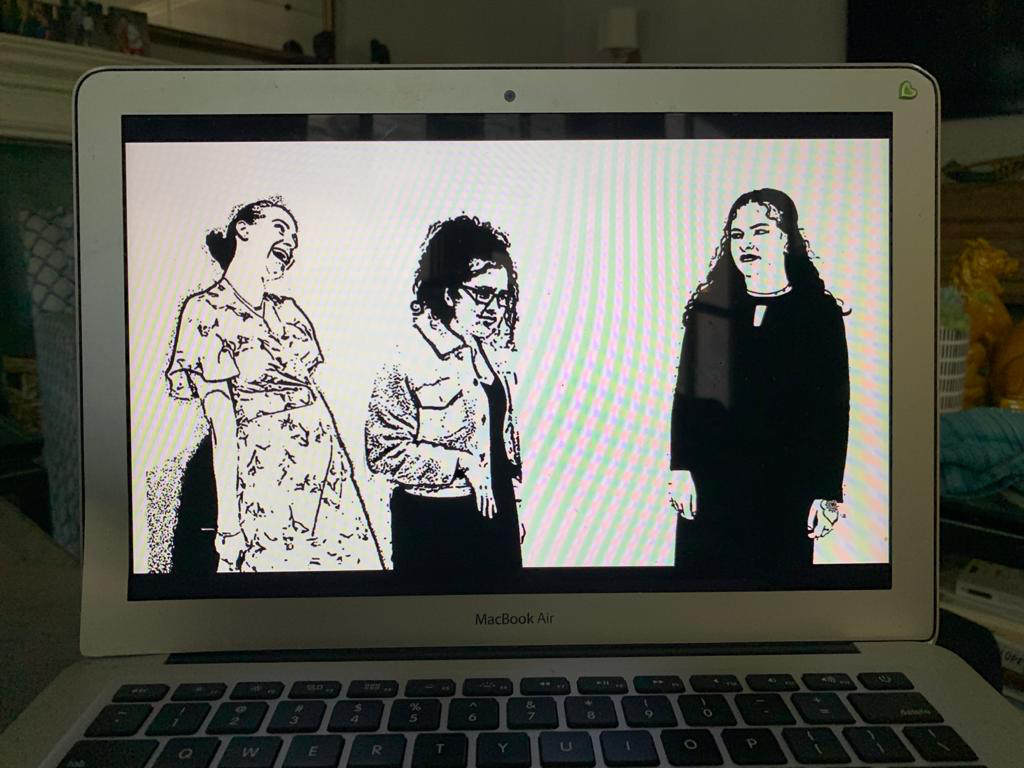 In annual spring One-Acts, pandemic reshapes the platform — and some of the plots

When the Shalhevet Drama’s spring production was almost in tech week — its final week of rehearsals before the live show — COVID-19 came to Los Angeles. The students began to wonder if the show would still go on.

Drama teacher Ms. Emily Chase began looking for ways everyone could still see it the second that the stay-at-home order took effect on March 16.

Eventually, she confirmed their worst fears — but only partly.

“We had to cancel our production,”  Ms. Chase said in an interview last month.

With memes and TikToks, teens lighten the mood of ‘corona break’

“And I told the kids that we were going to find a way to tell their stories.”

Shalhevet’s spring drama production always consists of student-written material, so whatever was going to happen, it would mean this year’s students would need to present their work in a different medium than they had originally written it for.

To respect social distancing for both performers and audience, each story was looked at individually by its director and its writer to decide what format would fit best with its plot line.

“Along with the student writers and directors and producers,” Ms. Chase said, “we came up with a plan to convert two of the plays into what are essentially Zoom plays — they take place on Zoom – and one of them became kind of a storybook.”

Neima and Ariel turned their plays into short films, while Yishai opted for an animated storybook.

Talya’s script was always meant for the film, so it did not need to be adjusted.

All of the plays made it into the show, which was called It’s All In Your Head.

Neima Fax’s “I Will” revolved around a girl who is proposed to by her boyfriend over Zoom, and whose friends and family influence her decision. It features one-on-ones between the main character and her friends as they help her make her decision.

Neima had a difficult time with having to adapt the play for Zoom.

“I originally did not want to do a Zoom play,” she explained. “I really wanted to do some sort of art or animation… but Ms. Chase helped me realized that it could work as a Zoom play, and that random things get thrown in your direction and you just have to deal with it.”

The play itself ended up reflecting that good things did not completely stop when everyone had to separate in their own houses.

“It turned out very different,” said Neima. “When I changed the script, I think it was a cool way to view the virus and the different ways people are dealing with everything. It has this message about how these huge moments, like your proposal, are majorly shifted by this global pandemic.”

It was a cool way to view the virus and the different ways people are dealing with everything. It has this message about how these huge moments, like your proposal, are majorly shifted by this global pandemic.”

— Neima Fax, playwright of I Will

Ariel Urman turned her play, “Mental Block,” into a Zoom conversation between a depressed student and a teacher trying to reach out and help her.

“Originally it was supposed to be in a classroom, and the teacher would walk in and try to like walk out and it would keep going back and forth,” Ariel said. “Whereas here you can’t really do that — you can’t exactly have it almost leaving a zoom and trying to come back.”

But the change in the platform made the play feel more raw, she said, and the acting more intense.

“I liked getting to see it in a different way,” Ariel said. “Because we were doing it on cameras, it was like a different kind of acting also. On the stage, you have to be much bigger, much louder, and kind of exaggerate a little bit more, whereas this way… since it’s so close and personal, it has to be more real.”

Yishai Thau’s play, “Speak Now,” was supposed to take place at a graduation party. He decided that it made more sense for the play to become a storybook than to film it on Zoom, because the lockdown prohibited the actors from coming together in a group.

With the help of professional editor and videographer Matthew Hill, Yishai gave the play a comic-inspired format. Photographs of the actors were turned into black-and-white outlines edited to look like sketches, which gave the viewer the ability to see their facial expressions.

And with the help of professional sound designer Chris Moscatiello, Yishai used the actors’ own voices to tell the story

Talya Kukurudz’s play was originally written to be a parody Youtube cooking video. She was the only playwright who did not have to make major changes to her script for “Kuku’s Kooking.”

Throughout the video, which centered around her making crepes, she narrated what she was doing, making fun of herself, quarantine and a typical Youtube cooking channel — all to the tune of her own theme song.

“I guess it wasn’t as professional as I wanted it to be,” Talya said, “but I think that the fact that it was in quarantine, I was able to bring humor and make it a bit more funny than it was originally supposed to be so that was good.”

The final product of the plays was compiled into one long video, which the student body watched together on May 6 — the same day that the live play would have been put on. So the play was performed exactly on schedule, and COVID-19 did not delay it.

The fact that it was in quarantine, I was able to bring humor and make it a bit more funny than it was originally supposed to be so that was good.”

It remains available on Youtube for anyone who wants to watch it.

Every playwright expressed gratefulness to Ms. Chase for her efforts. They each got to see their scripts come to life, even if it was not the way they originally imagined.

Ms. Chase said it was a learning experience for everyone, including herself.

“There were a lot of obstacles and redos and failed attempts as we tried to figure it out,” Ms. Chase said.

“We learned so much. We learned about creating an audio play in very difficult conditions for everybody with different levels of technology. We weren’t making mistakes, we were just learning…

“We didn’t have a warning so if it happened again we’d know what kind of equipment we needed, but we had to do it in a pinch and I’m very pleased with how it came out.”