This story won a Best of SNO award.

“Overdosing is just not cool,” said the rapper Mac Miller in 2016, describing his battle with addiction in his first-person documentary, Stopped Making Excuses.

“There’s no legendary romance,” he continued. “You don’t go down in history because you overdosed. You just die.”

Comments like that made it perhaps even more of a shock when Miller died last Thursday from a drug overdose at his home in Studio City. An artist with an inspired following, he had many fans at Shalhevet.

Born Malcolm James Mccormick in Pittsburgh in 1992, Miller was Jewish and had had a bar mitzvah, as he mentioned in interviews. Though he rarely referenced it in his music, Miller often appears in lists of the best Jewish rappers.


He was beloved by Shalhevet students, some of whom saw his journey from an immature pop-rapper to a maestro of melancholy as at least a partial mirror for their own personal growth.

Miller’s career began with the release of several mixtapes while he was still in high school, eventually leading to the release of his debut studio album, Blue Slide Park in, 2011 when he was just 19.

“His last two albums were so amazing, and not just for having fun with but they had a lot of meaning and emotion in them. And they will forever be art that I can personally relate to.”

The underground and inexperienced nature of his early music attracted a devoted fan base.

“When I was first getting into rap music, I tended to like amateur rappers,” said sophomore Aiden Bieda, “and Mac Miller at the time had a pretty amateur sound and he was one of the few rappers that really got me into rap.”

Miller’s early songs were mainly about sex, drugs and his success — not unusual for the genre — and became the soundtrack of high school and college party culture at the time. His 2011 single “Loud” followed this formula, with lyrics like:

Got a million, make a mil more
Play a number one spot on the billboard

While he was extremely popular at this time, along with success came deep personal struggles. His later music matched his personal life with a drastic change in style, with a much more mature and darker tone. Miller often rapped about his struggles with depression and drug addiction.

His second album, Watching Movies With The Sound Off, was full of darker songs such as “Objects in The Mirror” where Miller rapped,

Never thought that it would feel this way
You never taught me how to heal the pain
I wish you caught me on a different day
When it was easier to be happy.

“His last two albums were so amazing, and not just for having fun with but they had a lot of meaning and emotion in them,” said Aiden, “and they will forever be art that I can personally relate to.”

Miller’s latest album, Swimming, was released just a month before his death. It dealt with his depression after his public breakup with the singer Ariana Grande. On the album’s “Come Back to Earth,” Miller demonstrated his trademark melancholy style.

–Mac Miller, Come Back to Earth

Miller’s musical profile was not only composed of rapping. His later music often blurred the line between singing and rapping. While his voice was not that of an angel’s, his sincerity shone through his raspy tone.

He also taught himself to play piano, drums, guitar and bass and produced music for artists including SZA and Vince Staples.

“Mac could play any instrument, and his sound was so unique and dope that he will forever be an icon and legend to me and my generation,” said senior Noah Rossi.

His death sparked an outpouring of grief and reflection from artists including Chance the Rapper and G-Eazy, who both commented on how Miller had affected their lives.

“I dont [sic] know what to say Mac Miller took me on my second tour ever,” tweeted Chance the Rapper. “But beyond helping me launch my career he was one of the sweetest guys I ever knew.”

Few Shalhevet students knew he was Jewish. But his song “Under the Weather,” from his debut album Blue Slide Park, includes the lyric “I always do it big like a Jewish nose,” and a later song called “Oy Vey” lacks any further Jewish subject matter aside from the Yiddish expression in the title.

He also called himself “the coolest Jewish rapper,” in an interview with Shalom Life.

Senior Ayala Chocron, who saw Miller in concert, was impressed by his humility.

“He played his music, made sure everyone enjoyed themselves and hyped everyone up,” Ayala said, “but after every single song spoke about how humbled and grateful he was for his audience and fans, because their support was the reason why he has any success and happiness.”

Miller’s death continues a disturbing trend among young rappers, including A$AP Yams and Lil Peep who have died of drug overdoses. 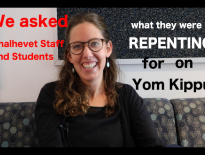