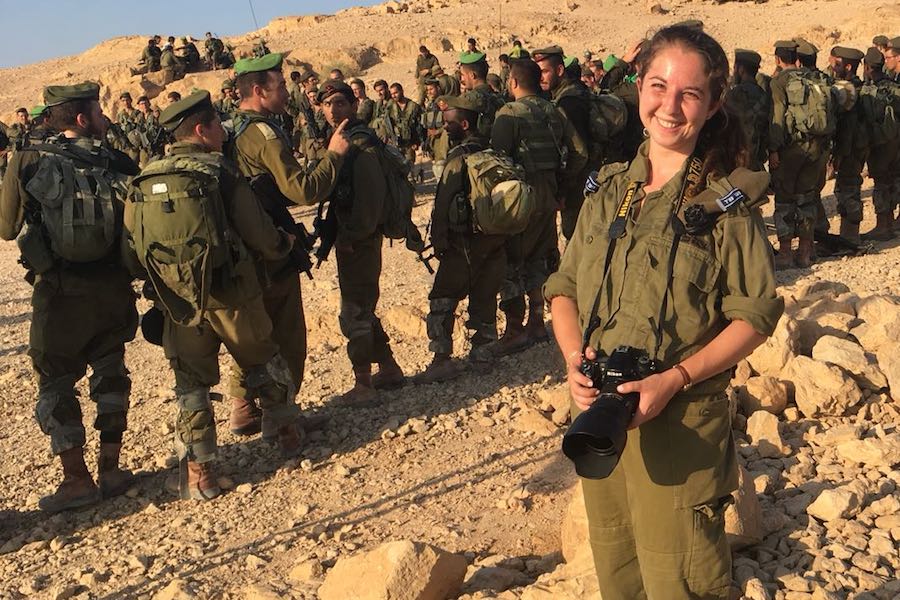 Imagine you’re watching gruesome raw footage of people running with weapons, setting fire to wide swathes of land and threatening harm.  Now imagine you are in charge of trying to send these images out to audiences all over, but you know that most likely, in most of the world they will never be seen.

Rachel Lester, Shalhevet class of 2012 and now serving as a private in the Spokesperson’s  Unit of the Israel Defense Forces, faces this struggle all the time. It’s her job.

The problem was particularly acute during last spring’s Gaza uprising. Although she’s fluent in Hebrew, Rachel was working on the English-language social media desk.

“I was really frustrated sitting at my computer watching all this footage, knowing that most people [outside of Israel] will never see it because it’s not going to make the news,” Rachel said in an interview while she was in Los Angeles on leave during the summer.

“Seeing the rioters with weapons … seeing the ones cut through the fence and then get caught on our side of the border,” she continued, “and go through interrogation and say, ‘Yeah we were sent by Hamas, we don’t want to be here.’”

After high school, Rachel attended Stern College of Yeshiva University for a year and then transferred to USC, where she majored in Cognitive Studies and minored in Digital Studies.  While at Shalhevet, she was active in Boiling Point, choir, softball and yearbook.

After graduating from college, she made aliyah, worked with Stand With Us and participated in ulpan (intensive Hebrew language training) until joining the IDF last Nov. 22.

The Spokespersons Unit’s main job is to report on what IDF soldiers are doing and sharing that information with the rest of the world. For example, during the recent Gaza protests leading to Nakba Day, the unit tried to articulate exactly what was going on and how IDF soldiers are responding. Rachel’s job is video editor and graphic designer.

However, she’s not really sure it is possible. According to Rachel, no one outside the country can actually understand the logistics of the recent protests.

“It’s a battle that’s impossible to fight — it’s like explaining color to a colorblind person,” Rachel said. “North American audiences don’t understand terrorism, to say that there are 30,000 people on the border, many of them armed and successfully infiltrating, [that] they have kites that are burning land…

According to Rachel, the purpose behind the protests was for the Palestinians to take back their what they consider their land after 70 years of Israel’s existence there. Members of Hamas, or Palestinians sent by them, would go to the Gaza border security fence every Friday up until May 19, Nakba Day — “day of the catastrophe” in Arabic, which mourns the displacement of many Palestinians after Israel’s independence was declared the day before.

There were tens of thousands of Palestinians attending, she said, many rioting and many not. According to Rachel, the ratio is impossible to know.

Even when the Spokesperson’s Unit does manage to articulate things, many world media sources don’t use what the IDF reports.

Another challenge, she said, is the speed of social media. She said she spends so much time fact-checking, going through the details and confirming with her officers that the world has already been informed by other sources that may or may not go through every detail in the manner that she and her unit do.

“There’s a lot of irony in the fact that fewer people believe our side because we take too long making sure it’s completely accurate before we put it out,” said Rachel.

Rachel thinks Shalhevet and her jobs at The Boiling Point prepared her for this role. She remembered the intensity of newspaper production nights, the myriad details of layout, and the need for all stories to be on time, fact-checked and thorough — along with combining co-curriculars with schoolwork.

“I was really frustrated sitting at my computer watching all this footage, knowing that most people [outside of Israel] will never see it because it’s not going to make the news.”

“I really can’t emphasize enough how if I didn’t go to Shalhevet I’d be such a different person and that person would not survive in the army,” she said. “Production night (at The Boiling Point) is what the army is like everyday. The stress management that you learn as a high schooler, that’s what it’s really like in my job.”

Boiling Point faculty advisor Mrs. Joelle Keene said Rachel is the only BP staffer ever to have won national prizes for both writing and page design.  She said Rachel was was multi-talented, and at various times served as Features Editor, Chief Layout Editor and Managing Editor, among other positions.

Mrs. Keene said Rachel was an original thinker who helped move the paper forward and was always looking for new work to do.

“She was extraordinarily hard-working, moral and focused,” said Mrs. Keene. “For her to have the talent and excitement about stories and the imagination for layout that she had, and then be able to use them both in the service of a complex situation like the situation in Israel, is a gift to the Jewish people.”

“We all enjoyed her,” Ms. Salem said. “She seemed very mature for her age compared to other kids. I noticed a big smile all the time.”

And although Shalhevet may have helped in preparing her for the army, other things contributed to Rachel’s desire to enlist. One of the most influential was at a conference for the group Christians United for Israel, when she was entering her senior year at USC. She happened to meet a fellow Jew who was in charge of the event, guiding the IDF soldiers that were speaking.

“We were talking and he was like, ‘I love my life, I have a great wife, great kids, I love my job, but the one thing I regret is not going in to the army when I could have,’” Rachel said. “I don’t think it was the first time I heard it but it was the most important one. This was the last age I could serve and I knew if I didn’t do it, I would regret it.”

Before making aliyah, Rachel had been to Israel five times, including her senior trip at Shalhevet, Birthright and volunteering for two months in 2014 as a civilian in the army.

With the help of these trips and her high school education, she thought her Hebrew was pretty decent and didn’t realize how much she was lacking until taking IDF basic training — where she improved by “a million levels.”  But since she works in international media, she spends the majority of her time speaking English on a day-to-day basis.

Still, being an American in the army is a challenge.

“American culture and Israeli culture are very different,” she said. “Being an American in the army means thinking with a brain you’re not used to.”

She said working in the real world and in the Israeli army entails replacing your norms with the norms around you — including the norm of democracy and student decision-making she remembers well from high school.

Nevertheless, Rachel’s transition wasn’t that difficult. Unlike many who may wait months and months to join the army, she made aliyah in July and was in the IDF in November. She was in basic training with mostly international people who had also made aliyah recently, so she wasn’t the only non-Israeli in her group. She never felt like she didn’t know what she was doing.

In fact, something that surprised her about being in the army is how much of an impact she’s been able to have as such a new soldier. According to her, she finished basic training on a Tuesday, arrived at her post on a Wednesday, and saw her first graphic posted worldwide on Facebook Wednesday night.

An average day during a calm period means getting to her station in central Tel Aviv at 9 a.m., joining a morning meeting to discuss what the day will bring work-wise — it could mean contacting spokesperson representatives in different units, for example, and finding something interesting to film, or a ceremony or event. Sometimes she edits a video from footage someone has sent her.

And in spite of the difficulties she faced, she believes videos she edited about the Gaza protests had some success.

“My most successful videos have been the ones where I wrote my own scripts, and I put it into context so that is more relatable for our audiences,” she said. “The first video about the kites and the fires, I put in the script, ‘oh it burned 6,100 acres of land.’ Then I wrote, ‘That’s two Central Parks, 22 Disneylands, 1300 football fields.’And that was the one that got a couple million views.”

Does she believe peace will come?

“If the Palestinians ever rise up against Hamas and find a moderate party to govern them, then I would be really hopeful,” she said.  “But while Hamas is continuing to oppress their people I don’t see how that could happen.”

This story won the Nefesh b’Nefesh Charley J. Levine Memorial Award for Journalistic Excellence in Covering Zionism, Aliyah and Israel, First Prize for newspapers with circulation under 15,000 — one of the 2019 Simon Rockower Awards administered by the American Jewish Press Association.

Divrei Torah In varying sounds of the shofar, new opportunities… 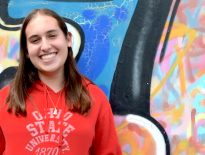 Clara's Calls CLARA’S CALLS: Kvetch about the present, but…