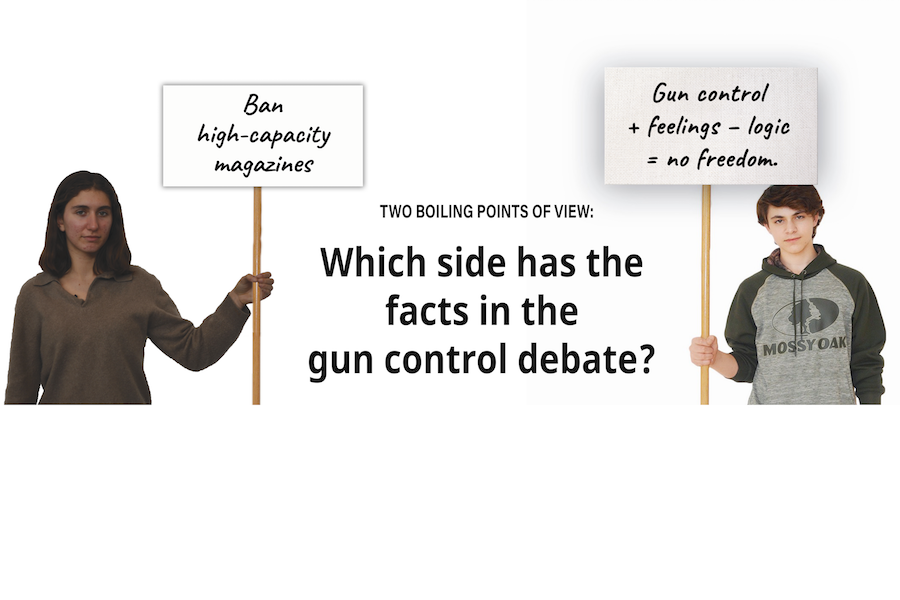 TWO BOILING POINTS OF VIEW: Which side has the facts in the gun control debate? 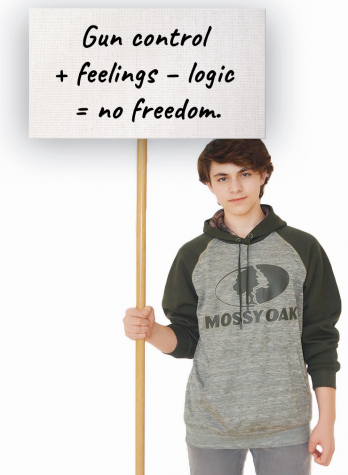 On Friday, March 23, Mia Freeman and Hayley Licata, survivors of the shooting at Marjory Stoneman Douglas High, spoke to Shalhevet about their experiences during and after the school attack. Touched by the message of students and survivors like them, many are looking for ways to ensure that massacres of children do not happen again. Often, their solution is strict gun control.

In this debate, many advocates of gun control do not have logic and truth on their side so they compensate by employing emotion to gain the advantage. This obfuscates the real issues at hand and causes the debate to be led solely by anger and grief. There are places for emotion, but not when it comes at the expense of reason.

This was made clear just days after the Parkland shooting when two Stoneman Douglas students, Emma Gonzalez and David Hogg, spoke on CNN denouncing pro-Second Amendment politicians. They claimed that if these politicians continue to accept “blood money” from the National Rifle Association then “they are against the children” and are “taking money from child murderers.”

Leaders of news media who favor gun control would not make these kinds of accusations themselves, so they instead use these children as a platform to appeal to the public’s emotional disposition.

And when people use logical arguments to debate these children’s radical political views, they risk being called callous and immoral because they “dare argue with a mass shooting survivor.” Being a mass shooting survivor only gives one the sick feeling of seeing death by gun and begs an opposing debater to be considerate and empathetic. But it does not automatically imbue one with knowledge of the Second Amendment, or guns and their value to society. 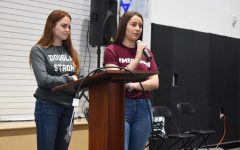 The sad reality is that the emotions aroused by the Parkland shooting are being used to abolish one of our most fundamental American freedoms, the right to bear arms.

Anti-gun campaigners will tell you that they don’t want to take away your guns, that they are pro- Second Amendment. But the lack of logic in the policies they are pushing proves otherwise.

They say the AR-15 (ArmaLite Rifle, not “assault rifle” or “automatic rifle”) is “too much gun,” claiming that there is no reason for any civilian to own one. In reality, it is an efficient and easy-to- use firearm that offers a significant and desperately needed advantage over an assailant.

They say that banning the AR-15 will eliminate or reduce violence. But doing so will only leave the common folk without the ability to effectively thwart an attacker, which defeats the exact purpose of the Second Amendment.

They also call AR-15’s “assault rifles” and “weapons of war”, basing these claims on the gun’s tactical look and cosmetic similarities to weapons of war. AR-15’s are actually the civilian version of the M16 assault rifle used by the U.S. armed forces. Note: civilian version. They have the same semi-automatic capabilities as those of civilian handguns and lack the rapid-fire machine gun qualities of fully automatic assault rifles, which have been highly regulated since 1934. The fully automatic military M16 has an effective rate of fire at 150 to 200 rounds per minute, compared to only 45 rpm for the semi-automatic AR-15.

“The sad reality is that the emotions aroused by the Parkland shooting are being used to abolish one of our most fundamental American freedoms, the right to bear arms.”

On top of that, according to data from The Guardian, only 3.55 percent of gun homicides in America are from rifles—and the AR-15 is only a subset of those rifles.

And according to data I’ve extrapolated from the FBI and Mother Jones, mass shootings only account for about 0.4 percent of firearm homicides, and rifles, let alone “assault rifles”, are only a small percentage of those mass shooting deaths. If the goal is to reduce firearm deaths, it won’t be accomplished through arbitrary bannings of guns like the AR-15.

The push to ban a weapon that only amounts to a tiny percentage of gun deaths can only be explained by the fact that its supporters really believe all firearms should be banned. They know that they would never get a ban all at once, so they work toward it one small legislative measure at a time. Banning assault weapons like the AR-15 is merely a symbolic ploy meant to accustom the people to the eventual confiscation of all their firearms.

The issue of gun violence is real. There are too many deaths. But it is an extremely complicated topic and can only be addressed once gun haters end their exploitation of feelings and misinformation to push radical policy.

These partisans must stop clouding their emotional argument under a veil of artificial logic and presenting it as reasonable. Emotion has appropriate applications, and in this debate, sensitivity to the victims of such violence must be paramount. But policy must always be founded in sound logic and reason. Only then we will be able to come together as a nation and create a safer America for all. 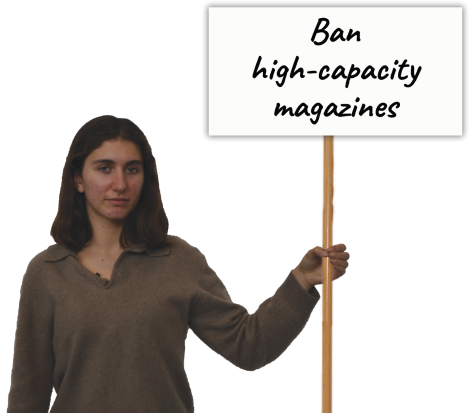 On March 14, millions marched in schools and communities around the U.S. to protest gun violence. In Los Angeles, some posters had slogans like: “NRA: Blood is on your hands!” “AR-15s are murder machines” and “I am 12. I shouldn’t have to protest for my safety.”

The 40 or so marchers I spoke to in Los Angeles said they were marching for “sensible” gun control, or at the very least better enforcement of the existing security laws, something that could have prevented Nikolas Cruz from opening fire on Marjory Stoneman Douglas High School

Feb. 14. While my sample size is small, no posters said anything about banning all guns — just AR-15s, school shootings and the NRA.“Sensible” gun control meant different things to different people, but no one mentioned a national ban of all guns. Most echoed the sentiments of Parkland survivor Emma Gonzalez, who has become a face of the movement. In an op-ed for Teen Vogue, Emma wrote: “We need to digitize gun-sales records, mandate universal background checks, close gun- show loopholes and ban straw-man purchases, ban high-capacity magazines, and push for a comprehensive assault weapons ban with an extensive buyback system.”

Straw-man purchases occur when someone buys a gun for someone who is not allowed to have one due to a criminal record or mental illness.

Opponents of those measures worry that revoking some guns would provide the impetus for more gun control. But there is no way to predict this, and the “If you give them an inch they’ll take a mile” adage often comes from a place of irrational fear. In 1971, the voting age was decreased from 21 to 18, and while some likely worried “What’s next — 10-year-olds voting?” that never happened. Oh and by the way, bestiality has not been legalized since since gay marriage has.

Though a ban on AR-15s and bump stocks wouldn’t definitively end gun violence, it would prevent some gun violence, and would show that our government is serious about preventing shootings. According to The Washington Post, banning assault style weapons would specifically prevent gun massacres. During the assault weapons ban of 1994-2004, there was a drop in deaths and incidents.

Certainly, the gun laws currently in place should be actually enforced. If they had been, maybe the Parkland shooting would not have even happened. If it’s your life that’s saved, even though you never know, you’re glad.

“Even George Washington, the father of “logical” American freedoms, probably felt deeply oppressed by the British motherland. Feelings and visceral emotions are a valid thing to bring to the table.”

A second issue people have with the movement is that it was founded and continues to thrive as a group motivated by emotion — specifically, the trauma of survivors and sadness of those who were close to victims.

But the people who survived these shootings have every right to voice their opinions on gun control because they are the ones who actually understand the effects of lax gun control:15-year-olds attending 17 funerals in one week. More to the point, they contribute a perspective which for the rest of us is not a lived experience.

Even George Washington, the father of “logical” American freedoms, probably felt deeply oppressed by the British motherland. Feelings and visceral emotions are a valid thing to bring to the table.

Of course, facts should not be left out of the equation. Basing arguments solely on feelings is dangerous. Decisions based on no facts or real information often distort the truth and lead people in the wrong direction. But what Gonzalez called for in her Teen Vogue piece was not an emotional distortion of reality. Following the recommendations she proposed would actually prevent some violence, by preventing illegal or problematic gun purchases.

What survivors want is not a tyrannous stripping of liberties. It bears repeating: they want more security surrounding the purchase of guns, universal background checks, closing gun-show loopholes and banning high-capacity magazines. That’s what they say. That’s what they mean.

Really, the issue does not have to be so partisan. Both sides have shown support for proper enforcement of current gun laws, as well as taking action through hiring guidance counselors and security professionals in schools. Both sides want to see an end to gun violence, or at least I hope they do. This issue is visceral and politicized, so it is easy to imagine a great distance between the right and left.

But for once in American politics, both sides have similar goals and routes of action, so instead of calling one another dishonest and manipulative, why not unite on this issue in a — as many have been putting it — “sensible” manner?

One Response to “TWO BOILING POINTS OF VIEW: Which side has the facts in the gun control debate?”

TWO BOILING POINTS OF VIEW: Which side has the facts in the gun control debate? 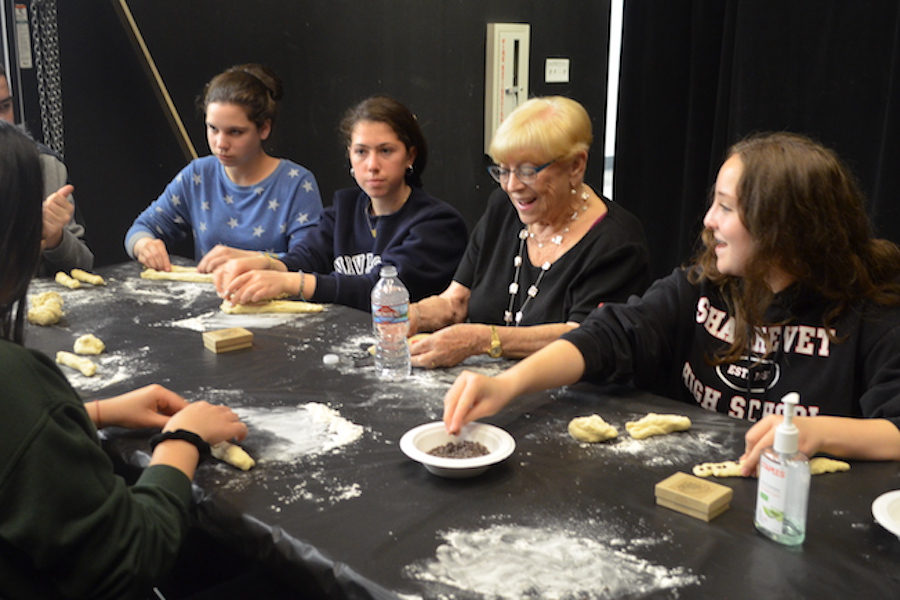 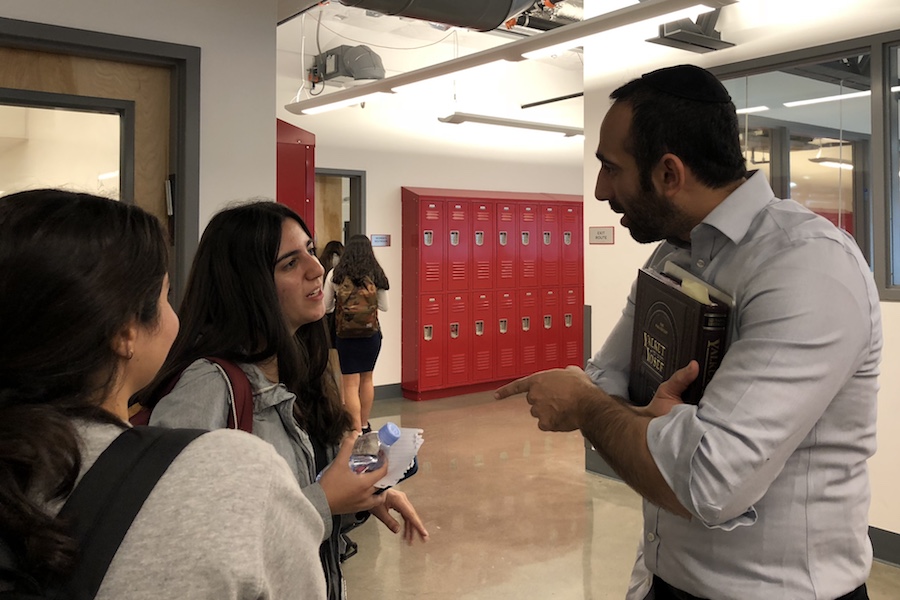