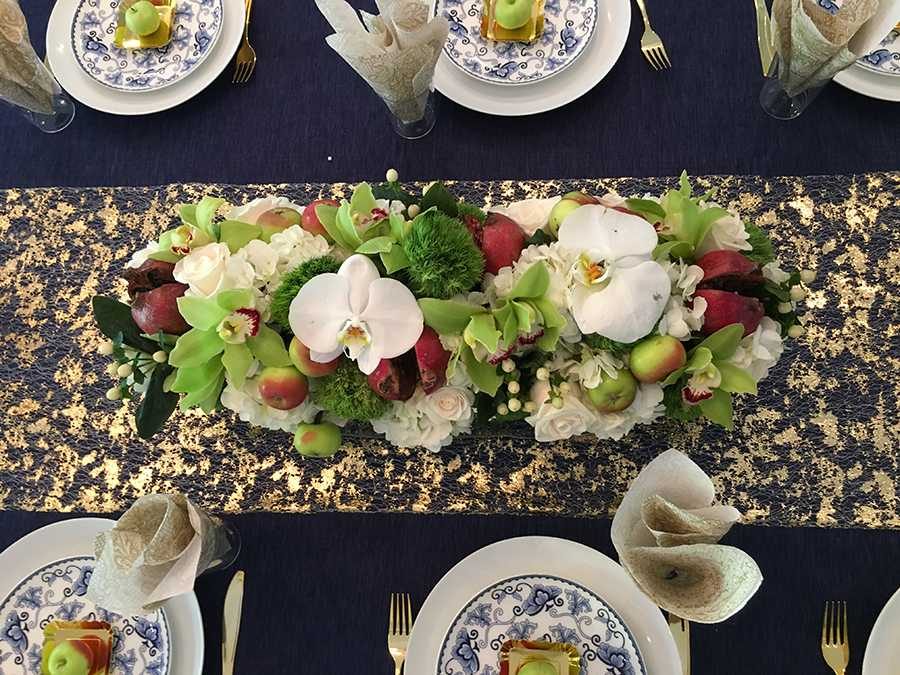 Rosh Hashanah starts tonight. Happy 5777 everyone from the Boiling Point!

A diverse school comes with countless customs, and the upcoming holiday of Rosh Hashanah is a chance to see them at their most diverse.  That’s because Jewish ethnicities from Persian to Polish and Moroccan to Syrian, all celebrate the holiday with symbolic foods.

While everyone is familiar with the custom of dipping apples and honey — hoping for a year that’s well-rounded and sweet — interviews with students of various backgrounds found a variety of ways to represent the head, or rosh, of the year (shanah) on their holiday tables.  Here are a few samples, along with a wish for a Shanah Tova to all our readers from The Boiling Point.

Seniors Talya and Eitan Ohana come from a traditional Morrocan background. On their family table the first night of Rosh Hashanah, there is not only a fish head but also the head of a ram. Additionally, while their father was living in Morocco, it was customary to slaughter a baby lamb in remembrance of Akeidat Yitzchak, which some say occurred on Rosh Hashanah, in order to ask God for the same mercy he showed to Yitzchak on the alter.

Another special food the Ohanas eat on this holiday is couscous with cinnamon spice and raisins, whose sweet flavor symbolizes a sweet year to come.

“My favorite custom on Rosh Hashanah is eating honey until Sukkot, because there’s something special about it,” Talya said. “You want to continue the sweet year.”

Eitan Ohana explained why these traditions are so meaningful to him.

“It makes me feel connected Morocco in some way, which is my heritage,” Eitan said, “because otherwise I have no connection to it being born and raised in America.”

Junior Lily Nostrati’s family is Persian. Although most Persians and other customs have the head of an animal such as a fish or lamb on the Rosh Hashanah table, Lily’s family has a chicken wing.

“It’s a tradition my family has been doing for generations, even when they were in Iran,” Lily explained.

Junior Amberly Hershewe, who comes from an Egyptian background has the head of a fish on Rosh Hashanah in addition to cow cheek since it is customary to use anything related to a head.

One special food at Amberly’s Rosh Hashanah table is a middle easter green soup known as mulukhiyah, which is eaten with rice and onions soaked in vinegar.

According to chabad.org, for some it is also customary to refrain from foods which are sour or bitter such as lemon or vinegar, and instead focus on sweet foods. However Amberly’s family also eats dates, in order to symbolize a sweet year.

Leon Levy, a senior, has family which traces back to Syria. In the older days traditional Jews in Syria would use the head of a sheep rather than a fish to symbolize the head of the year.  But almost all Syrians today, including Leon’s family, eat cow tongue instead, and very few eat cow brains –also found in the head.

Rosie Wolkind, a junior , is from an Ashkenazi family originating in Poland and Russia. On Rosh Hashanah, her family has the head of a fish, along with carrots, beets, and pomegranates — whose seeds symbolize the many mitzvot anticipated in the year to come. In addition the Wolkinds have dates, occasionally squash, and apples dipped in honey, all to symbolize a sweet year.

For Rosie, it is also customary to go around the table and have one person read the English translation of each bracha, and then the next person read it in Hebrew.

Senior Emilie Kerendian, who recently moved from Belgium and has family originating from Iran, has her own special set of customs. Instead of fish head they eat cow tongue, similar to Leon Levy’s family. But the Kerendians also eat beans and beets on Rosh Hashanah.

It is customary for some people to eat beans on Rosh Hashanah because the Hebrew word for beans — rubia or lubia, is related to the words rav — in Hebrew, many — and lev, meaning heart. So the idea is to ask God for an increase in merit, and for Him to hearten us.

According to chabbat.org, the reason for beets is that the Hebrew word silka is similar to selek, meaning to depart — implying that we are asking God for our enemies to leave so we can be safe.