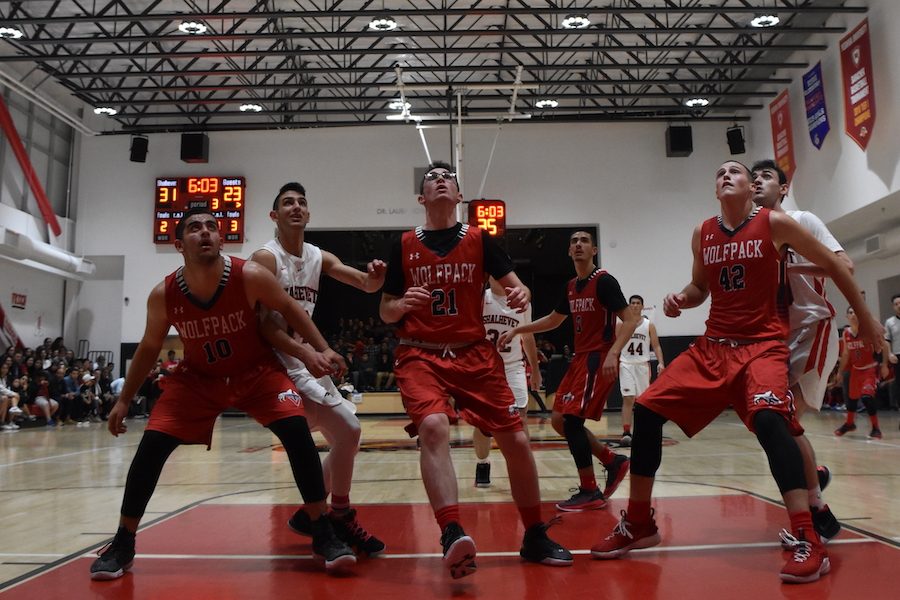 RIVALRY: Firehawk and Wolfpack players fought for position to get a rebound in the Firehawks’ 55-41 victory over the Wolfpack on the opening night of the Glouberman Tournament last fall. Following Shalhevet’s CIF quarterfinal loss 56-48 to Palm Springs in February, allegations surfaced that the Valley Torah coach gave the Palm Springs coach information about Shalhevet prior to the game, though Valley Torah denies any “malicious” encounter.

Shalhevet announces it has suspended play against Valley Torah in basketball

Shalhevet will refuse to play Valley Torah in boys’ basketball until the school’s head coach is replaced, because of help the coach provided to the Palm Springs High School Indians, the Firehawks’ opponent, in advance of this year’s CIF quarterfinal game, Rabbi Segal has announced.

It was the first time a Jewish high school had reached that level in California Interscholastic Federation competition. Palm Springs defeated the Firehawks 56-48 Feb. 14 in the matchup and later advanced to the Southern Section Division 3A championship game.

But they disagreed on the extent of the information given. Shalhevet says Coach Schwartzberg gave Palm Springs plays and film, while Valley Torah says Palm Springs was given much less, and that any assistance wasn’t significant since such information-sharing is common among coaches.

Rabbi Segal declined to call the assistance “cheating,” but said he considered it a chillul Hashem, or a desecration of God’s name.

“I thought it was a chillul Hashem that a Jewish team would give another team video of another Jewish team for scouting purposes,” Rabbi Segal said. 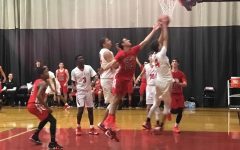 “I told Rabbi Stulberger that, for the time being, while Coach Schwartzberg is the coach at Valley Torah, we won’t be playing them in boys basketball,” Rabbi Segal said in a meeting with Boiling Point editors.

Asked whether an apology might be sufficient instead of a dismissal of the coach, Rabbi Segal said an apology would have to be extremely sincere.

“An apology was not offered or suggested,” Rabbi Segal said.

Rabbi Stulberger said he believes Valley Torah had only given Palm Springs a “general assessment” of the Firehawks’ strengths and weaknesses.

He said he regretted Coach Schwartzberg’s actions and told him not to do it again. But he said Shalhevet’s response was unwarranted.

“To me, Jewish schools playing each other is part of the L.A. fabric,” Rabbi Stulberger said in a telephone interview with the Boiling Point.  “I think it creates excitement for the fans, parents, and for the community.”

“I would have hoped that we could come up with a different resolution than the very drastic step of not playing each other,” he continued. “At the end of the day, it’s basketball.”

Shalhevet and Valley Torah usually play each other once or twice a year – either during the season, at the Steve Glouberman Tournament at Shalhevet, or at the Red Sarachek Tournament at Yeshiva University in New York.

The last time the Firehawks played the Wolfpack was in this year’s Glouberman first round on Oct. 31, and Shalhevet came out on top, 55-41.  They did not meet at Sarachek this year.

Both sides agree that Palm Springs had obtained film of Firehawk games — a standard basketball procedure, especially for playoffs. However, Shalhevet contends that they were given to Palm Springs by Coach Schwartzberg, which Palm Springs and Valley Torah deny.

Firehawks Coach Ryan Coleman agreed that coaches sharing advice with one another is a common practice. But this was different, he said.

He said Valley Torah coaches and players had been attending most of Shalhevet’s games for the last two years, gathering information that Palm Springs would not have been able to get on its own.

I feel sufficiently confident that stuff was shared beyond ‘play them zone defense.’”

“I know from two consecutive years of Valley Torah being at most of our games, and we have run the same plays for those two years,” said Coach Coleman, who was named 2017-18 Jewish Hoops America Coach of the Year,. “There’s nobody who could know more about our team than Lior.”

He also said he has evidence that Coach Schwartzberg gave Palm Springs a “very detailed” scouting report on the Firehawks, and that he felt betrayed by Coach Schwartzberg since the two previously seemed to have a positive coaching relationship.

“I would never give a detailed scouting report about somebody who I was friends with in the coaching industry,” said Coach Coleman. “It’s kind of like an unspoken coaching rule.”

“We don’t have a ‘smoking gun,’” Coach Remer said, “but when you take the totality of all the circumstances, you come to one conclusion and one conclusion only.”

Coach Schwartzberg denied giving Coach Howard any films he has of Shalhevet, or any “malicious” advice. He said  he had none to give, since the Firehawks and Wolfpack didn’t play each other in the CIF regular season this year.

In an interview with the Boiling Point, Coach Schwartzberg said Shalhevet didn’t expect to be beaten by Palm Springs, and so his friendship with Coach Howard — which was known to Coach Coleman — made him an easy scapegoat for the loss.

“The fact that Ryan thought, ‘Hey, we could probably beat them by 20 points, maybe he thought, ‘We were better, how did we lose?’” Coach Schwartzberg said.  “I think that’s partially why Coach Ryan jumped to that conclusion, because he knew that Chris is one of my closest friends.”

Coach Schwartzberg called Shalhevet’s response “blown out of proportion,” but said he regrets talking to Coach Howard at all about the Firehawks, because of the subsequent harm.

“In hindsight, knowing Shalhevet’s perspective on the whole interaction, I would probably tell Howard that I am not the person to talk to,” Coach Schwartzberg said.

Coach Howard generally defended Coach Schwartzberg, telling the Boiling Point the only advice he received from him was to play zone defense — advice he said he ignored.

Rabbi Segal said there was much more information given than that. He said Valley Torah had “stepped over a line,” though he declined to offer specifics.

“I feel sufficiently confident that stuff was shared beyond ‘play them zone defense,’” Rabbi Segal said.

Firehawk suspicion about the Palm Springs team’s information came early in their first-ever match in February. Team captain Zack Muller said he noticed during the game that Palm Springs was very familiar with the Firehawks’ plays.  He also thought Palm Springs could read Shalhevet’s hand signals.

“Anything we called, they called it back, and then they defended it very well,” said Zack, who was named co-MVP of the 2018 Glouberman Tournament last fall and of the Red Sarachek Tournament in New York in March.

Zack said he believes Coach Schwartzberg gave Palm Springs the Firehawks’ plays, scouting reports, and a “blueprint” for beating them.

Palm Springs Coach Howard acknowledged the calling back of plays but said it was just a ploy. He said would intentionally call back plays Coach Coleman called to make it seem as if Palm Springs knew the play.

“At a timeout,” Coach Howard said, “one of our kids said, ‘Coach we got them rattled, because they think we know all their plays, just because we’re repeating what they said.’”

Neither Zack nor Shalhevet’s athletic director accepted this explanation. Coach Remer said he was told by an unnamed Valley Torah player a few days after the game that it was almost as if the Wolfpack knew Shalhevet’s plays and hand signals as well as the Firehawks did themselves.

“They knew everything perfectly,” said Coach Remer, who coaches the Shalhevet girls basketball team. “It isn’t possible that someone didn’t tip them.

I would have hoped that we could come up with a different resolution than the very drastic step of not playing each other. At the end of the day, it’s basketball.”

Their suspicions were validated the day after the Palm Springs game, when Coach Howard and Coach Coleman discussed ways Palm Springs could defeat Santa Barbara in the CIF’s semi-final round.

Coach Coleman said that in that call, Coach Howard admitted he’d received information from Coach Schwartzberg about the Firehawks.

“He told me on the phone that day that Coach Schwartzberg gave him what he needed,” Coach Coleman said.

But Coach Howard told the Boiling Point he knew the Firehawks plays so well because he devoted hours to watching games videos of their games.

“I told [Coach Coleman]: ‘Hey man, it was hours and hours of film,’” said Coach Howard. “I called off Wednesday from work just to watch film.”

Coach Howard admitted speaking with Coach Coleman directly after the game, but told the Boiling Point that what he said to Coleman was, “Give that one to Lior” — meaning not that Coach Lior Schwartzberg had provided key info, but that it would please Valley Torah because of the rivalry between two Jewish teams.

“When we win, Lior wins,” the Palm Springs coach told the Boiling Point in an interview. “Because obviously Lior never beats Shalhevet.”

Coach Howard said the reason his team knew Shalhevet’s plays so well was that he had watched Firehawk game videos.

“They don’t want to give me any credit, I guess,” Coach Howard said. “But I watched about six to eight games on them.”

“As far as Lior goes, Lior said, ‘I haven’t scouted them, I can’t tell you anything,’” said Coach Howard. “He said the only thing I can tell you is to play zone, because I know they don’t have a lot of plays against zone.”

Coach Howard said coaches sharing advice with one another is normal, especially for the playoffs.

“People call me all the time for information about other teams as well,” he said.

For now, Shalhevet’s basketball players seem unphased by the controversy.

Rising-star guard Jacob Benezra said he doesn’t expect the decision not to play Valley Torah to have any effect at all on the way he plays the game.

“I suit up and play whatever team coach tells me to play,” Jacob said.