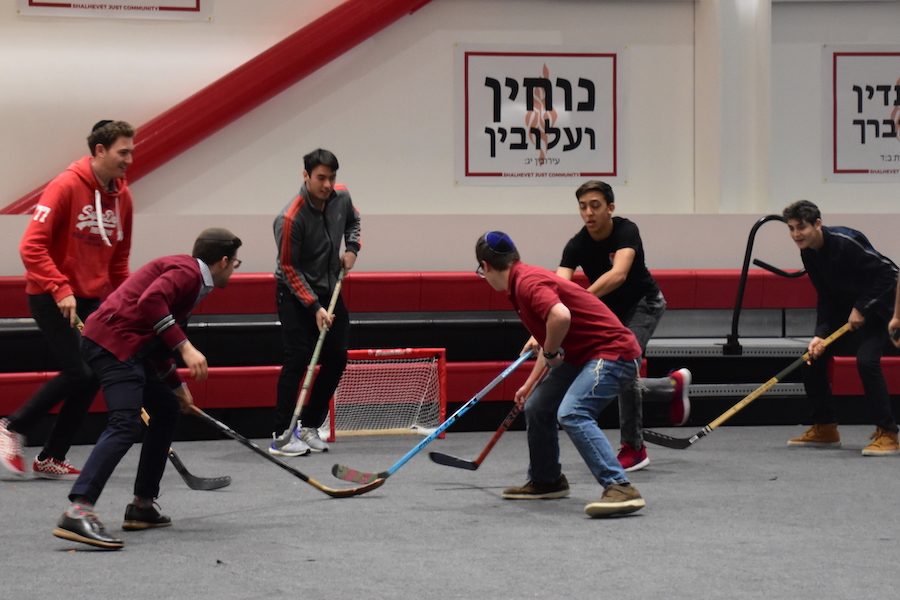 GAME: Hockey club leader Adam Ritz shelters the ball during a scrimmage in the gym Jan. 30. Photo by Carin Arbib" />

GAME: Hockey club leader Adam Ritz shelters the ball during a scrimmage in the gym Jan. 30. Photo by Carin Arbib

Every Wednesday after Town Hall, most students leave the gym and get their lunch, but a few stay behind to make a hockey rink out of the still-carpeted gym in order for Shalhevet’s hockey enthusiasts to be able to play their beloved sport.

Lugging black plastic folding chairs to the sides of the room, a group of about 7 to 20 students and teachers create a cushioned field to play on and a barrier to prevent the ball — not a puck — from leaving from the boundaries of the carpet-tiled rink.

It takes them several minutes of physical labor to set up the field, but these athletes are clearly willing to lift, fold, and stack 260 chairs to be able to play the sports that they want.

“We don’t have a budget, we are not really funded, and we operate pretty independently,” said senior Adam Ritz, who organizes the games. “But it’s really just a team effort.”

In an interview, Adam continuously expressed the delight that hockey brings him.

“I love the sport,” he said. “There are the stats and the players and the fans and the teams, and that whole aspect of it is super intriguing.”

He also mentioned that even as a freshman he and his friends had dreams of Shalhevet having an ice hockey team. However, it was not until he was in 11th grade that he was approached by Science Department Chair Mr. Pavel Lieb — who organizes pickup hockey games outside of school — about starting one.

“We got together at the end of last year, and came up with ideas for the structure of the club and how we would run everything,” Adam said. “Then I just took it and ran with it, and that is how it became the club that it is today.”

Mr. Lieb said that the hockey club was started to gauge Shalhevet’s enthusiasm for hockey.

He also said that he ultimately hopes the hockey club will move to the ice.

“We wanted to support the love of the game, in whatever version that might be,” Mr. Lieb said.

Since then, the hockey club has flourished, sometimes fielding as many as 20 players and meeting at lunch every Wednesday at 12:30 p.m. Adam and Mr. Lieb bring about a half-dozen sticks and two goal nets, with other members bringing their own if they prefer. The makeshift rink in the gym has enough space for all of the athletes to have a good time.

“Floor hockey is never going to be the same as ice hockey,” Adin said.

Getting funding might help. Adam said the funding would go towards buying more sticks, safety gear, as well as hockey shirts and jerseys.

Although the hockey team is not currently supported financially by the school, Dean of Student Life Dr. Jonny Ravanshenas says that might change, though he wouldn’t say when.

“If given the right proposal, Shalhevet may be willing to fund the hockey club,” said Dr. Ravanshenas.