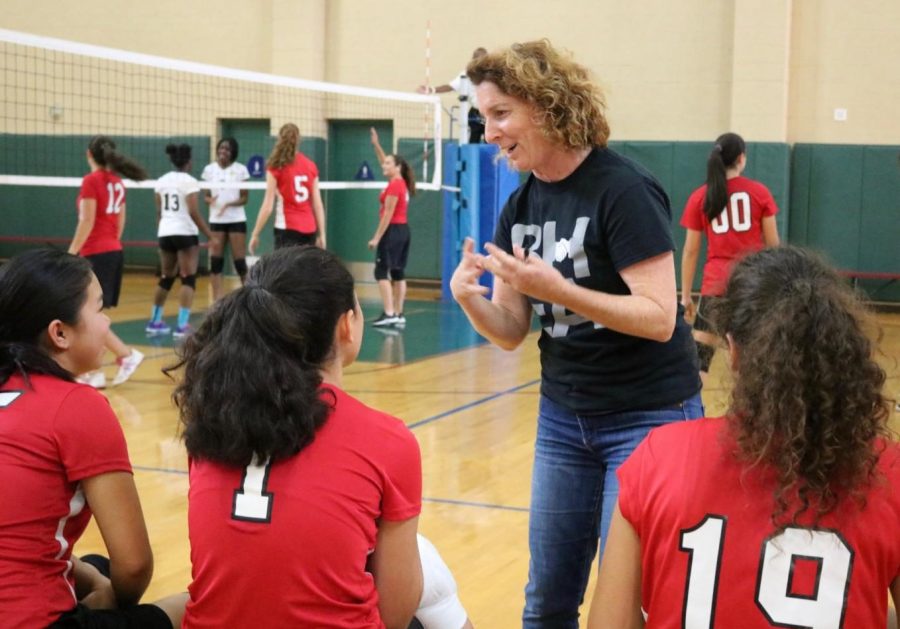 PEP TALK: Volleyball coach Ms. Marla Weiss offers pointers to her players during a game against Ambassador High School in the gym Oct. 17.

She has increased practice from once or twice a week to two hours every weekday, according to team co-captain Emily Schoen. She has also created a playbook of “schemes” — strategies the team practices and can use in various situations during games.

And she has established specific roles and positions for the players to focus on regardless of where they are in the rotation on the court — an approach she called “position playing.”

“As much as they are improving, every aspect of the game could still use more improvement,” the coach said. “We’re still learning a lot about offensive and defensive schemes. They’re still learning about technique, because they can all improve on technique in some way.”

“As great as it’s been there is always room for improvement.”

Ms. Weiss joined Shalhevet’s staff this year after coaching for 25 years at Beverly Hills High School,  She said she would like to improve the team both offensively and defensively.

Athletic Director Ryan Coleman said that was why he chose her.

“This coach wanted to make the program better and really cares about the kids and their fundamentals,” Coach Coleman said in an interview. “So the program has definitely taken a step in the right direction and has definitely been spending a lot more time on the court.”

Coach Weiss, who is the sister of Admissions Director Ms. Natalie Weiss, replaced former coach Mike Sweet, who Coach Coleman said was let go after last year’s season because he is also an actor and had too many time conflicts.

In past years, Coach Weiss said, the Firehawks “weren’t really position volleyball players, they didn’t have separate defensive schemes or serve-receive schemes. It was just like a recreational type of situation, and I’m hoping I introduced a different level of competitive volleyball to the school and to the group.”

“We’re a lot more disciplined when we play, we know what we are doing now, and she helped us get better at playing as a team,” said Maya.

On Oct. 17, the girls played Ambassador High School in the Shalhevet gym — without the juniors, who were in Houston on their chesed trip. But even without them, before the game sophomore Maya Tochner said this would be different than in years past.

“We have set plays,” Maya said. “We know exactly what to do in all the situations.”

Still, the Firehawks lost three sets to zero. After the game, Coach Weiss talked about the girls struggles.

“The team is still learning fundamentals, positioning and how to put it all together,” she said.

“I think they can improve on where they are on the court and everybody taking the position that is supposed to be their position,” said Coach Viggiano after the game.

Coach Weiss said the Firehawks’ whole approach to volleyball had changed, and it would take time for the girls to adapt.

Team co-captain Naomi Bijou enjoys the practices even though they are time-consuming.

“We have practice every day for two hours and if not, then we have a game,” Naomi said. “It does take up a lot of time, but if you’re dedicated and you love playing then it’s not really an issue. It’s only been annoying when I’ve had a lot of work, but besides that it’s really fun.”