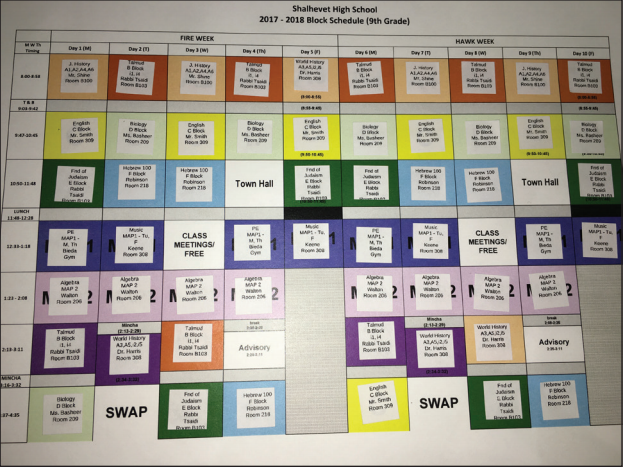 UPDATED: Lunch is 15 minutes longer for 9th grade than last year but MAP period still exists. Freshmen arranged their schedules as sticky tiles on a grid during orientation Aug. 24.

After a year of complaints that 25-minute lunch was hurting co-curriculars and making it hard for teachers and students to meet, school officials restored 20 minutes to freshmen and sophomores’ lunch period this year while keeping last year’s major innovation — the 45-minute daily “MAP” periods created so that math could meet four times a week instead of two.

Officials also implemented a decision made by the Just Community to end classes on Fridays at 12:45 instead of 1:15 by eliminating the 30-minute lunch break. That change is experimental, however, and they said the break may be restored second semester.

The new schedule was announced made in a community-wide email sent by Principal Dr. Noam Weissman July 28.

“There were certainly successes of the new schedule, but there were a few challenges we wanted to address based on the feedback we heard,” Dr. Weissman said in the email.

“We were responding to student and parent feedback on this issue where they were saying that a little bit longer lunch would be helpful,” he elaborated later in an interview. “In terms of running the school on a day-to-day basis, I noticed that Mincha was a little bit rushed as well.”

In the new schedule, underclassmen lunch has been extended to 45 minutes from the 25 to 30 minutes of last year (it was different on different days). Mincha break has been extended by five minutes, to 20 minutes, “so that students have more of a break in the afternoon as well,” the email said.

In addition, dismissal will be at 4:35 p.m. instead of 4:30 Monday through Thursday, and most class periods will be reduced to 58 minutes from a full hour. An exception to that is that juniors and seniors will have 63-minute periods immediately before and after lunch.

The two MAP periods, one of math and the other alternating between arts and PE, will remain 45 minutes right after lunch.

Before school began, students had mixed feelings about the announced changes. Junior Aaron Wiesel was unhappy that he had to learn a whole new system and odd class times, such as 2:13 to 3:11 p.m.

“It’s a lot easier to memorize your schedule and class times when they end with intervals of five like they did the past two years,” Aaron said, adding, “It’s annoying that for the second straight year, everyone needs to adjust to a new schedule.”

“I just really enjoyed those every single week,” Neima said.

But fellow junior Ami Nelson complained that the change had taken too long.

“I’m a little bit annoyed that it took them a whole year to decide that [30] minutes was not long enough for lunch,” said Ami. “I think we made our opinions pretty clear to them, in terms of why we wanted a longer lunch and how we thought that it was unreasonable.”

Shalhevet’s schedule is shorter than what is found at other Modern Orthodox schools, though ending five minutes later at 4:35 brings it closer. Shalhevet starts at 8 a.m., or for those who go to the Hashkama minyan, at 7:25. YULA Girls high school starts at 7:45 and ends at 4:20, and YULA Boys starts at 7:30 and ends at 5:15. Ida Crown Academy of Chicago runs from 8:05 a.m. to 5:39 p.m. on Mondays and Thursdays, with 5 p.m. dismissal on Tuesdays and Wednesdays. SAR (Salantar Akiba Riverdale) of Riverdale, N.Y., starts at 8 a.m. and ends at 5:10.

On the other hand, at Shalhevet, most students stay after school for a co-curricular such as Model Congress, choir, drama, robotics and sports practice, which may end at 7 p.m. or later. Other students have commitments outside of school.

“The change from 4:30 to 4:35 is not earth-shattering,” Dr. Weissman said. “It’s still insanely early for a Modern Orthodox school.”

Junior Donna Grunfeld pointed out that school ended at 4:20 p.m. her freshman year.

“I know that it seems like only 5 minutes, but it’s been 15 minutes in the past three years,” said Donna.

“I’m late for soccer every day now,” said junior Isaac Kahtan, who plays on a club team. “[The] coach gets mad.”

“I always had five minutes to get ready at home,” said Sadie.

Still, Dr. Weissman sees this schedule as an example of the Just Community and its democratic values in practice.

“[The] Just Community is so alive,” he said. “It’s an important nod to the Just Community and more than Just Community, it’s a nod to hearing from others and making decisions that are very thoughtful and thought through.”