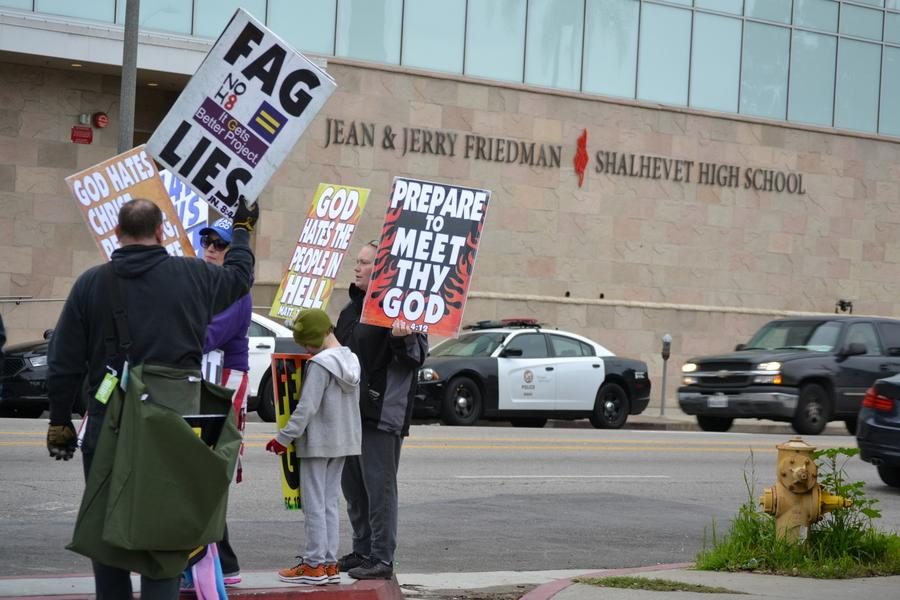 Nine members of the Westboro Baptist Church, including the church’s leader Timothy Phelps and his wife Lee Ann, protested outside of Shalhevet today from 7:10 to 7:40 a.m.

The group, which is based in Topeka, Kans., and not connected with any other Baptist church, stood across from Shalhevet at the dead end of Barrows Drive.   Most were holding signs with slurs aimed at Jews and LGBT individuals.

Staff of the Boiling Point had decided not to interview the protestors, but Eitan Arom of The Jewish Journal was there and spoke with The Boiling Point afterwards. He said Shalhevet was chosen only because it was Jewish.

But according to Mr. Arom, they were not aware of Shalhevet’s groundbreaking and widely publicized inclusion of LGBT students.

“I had to inform them that Shalhevet is relatively forward-thinking about that particular topic within the community,” Mr. Arom said. “That seemed to take them by surprise.”

Watching across Fairfax from them were Head of School Rabbi Ari Segal, board president Fred Toczek and former board president Larry Gill, who stood just outside of the school driveway with school security and Los Angeles police. LAPD officer and Shalhevet parent Ivan Wolkind was also there.

Students were not present because Rabbi Segal had decided that school should start late because of the protest. An alternative program of davening and chesed for students and teachers was held at Beth Jacob Congregation, culminating in a march to Shalhevet.

The church members waved their signs as cars went by, and sang Jewish songs with alternative lyrics. Songs included parodies of “The Sabbath Prayer” from Fiddler on the Roof and “One Day” by Matisyahu.

Instead of Fiddler’s “May the Lord protect and defend you, may he always shield you from pain,” they sang: “May a mourning spirit pour on you, may you look on him whom ye pierced. Bitterness of heart with grace and supplications fierce.”

They continued singing and waving their signs until exactly 7:40, when the police escorted them away, apparently because their protesting permit was only valid until that time. 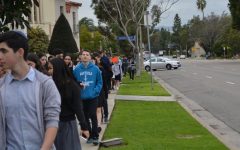 Mr. Arom said he asked Lee Ann Phelps, Timothy’s wife, if the protestors believe they are accomplishing anything.

“Her response was basically, ‘It’s not incumbent on us to get people to repent, but its incumbent to try,’” said Mr. Arom. “In other words, they feel that they’re fulfilling their scriptural responsibility by being out there and broadcasting their message. Whether people will take their message to heart is outside of their control.”

The Boiling Point did not conduct its own interview so as not to “condone their hateful message,” said co-editor-in-chief Maayan Waldman.

“We made the decision not to interview the protesters,” said Maayan, “because … we didn’t want to affirm what they were doing by giving them the respect of interviewing them directly.”

Church members group had flown from Kansas to Los Angeles to protest the Academy Awards yesterday, and they are flying home today, according to Mr. Arom.

On March 27 they will be protesting at Yeshiva University in New York.

“God Hates Your Idols preaching tour will stop at Yeshiva University … in religious protest and warning,” says a flyer on their website, which also gives an exact time and address.

At Beth Jacob, students from Shalhevet, YULA Girls, Milken and De Toledo gathered at 8:00 for davening, chesed and a march to Shalhevet. The students sang together, wrote letters to veterans, packed Shabbat kits for patients at Cedars Sinai, drew posters, and began walking down Olympic at 10:20 singing and dancing until they reached Shalhevet.

Reb Weissman announced the school’s reasoning for more learning in a Schoology post on Feb. 20.

Rabbi Segal had sent out an email Feb. 20 explaining why school would start late.

“While I do not believe in giving in to intimidation or backing away from anti-semitism, in this situation I believe this group does not even deserve to have us engage with them in any manner, nor do we want to risk any escalation,” wrote Rabbi Segal in the e-mail, which was sent to all students, parents and faculty. “As such, and after consulting with our security team, we will have a late opening at school on the 27th.”