The Boiling Point • May 24, 2016 • https://shalhevetboilingpoint.com/top-stories/2016/05/24/third-jspa-conference-views-journalism-through-a-jewish-lens/ 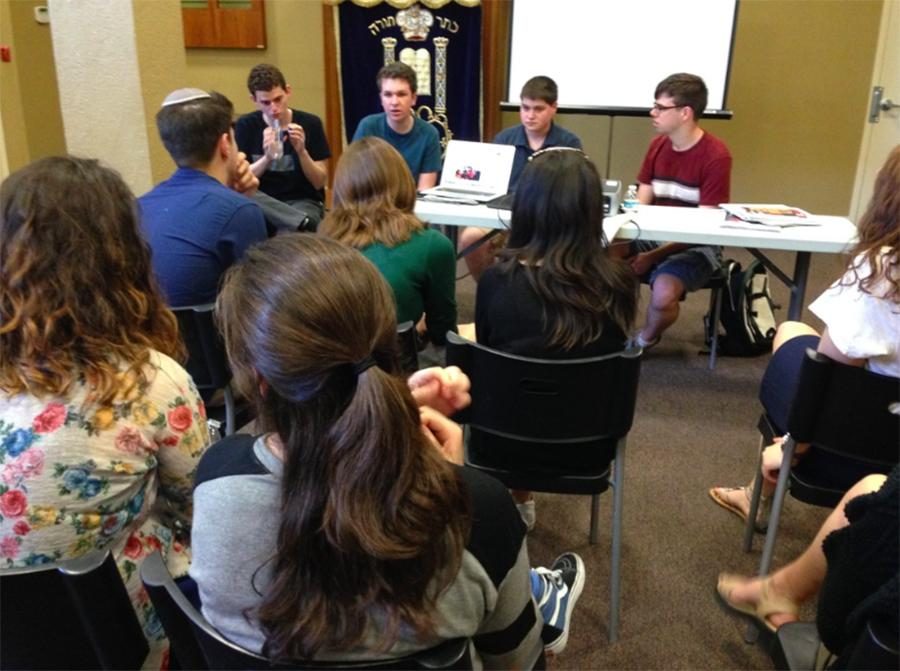 MENTORSHIP: Harvard Westlake journalists present highlights from their page, the Chronicle, and give tips.

Does journalism conflict with the laws of lashon harah – evil speech, or gossip?

Yes and no, students learned at the third annual conference and Shabbaton of the Jewish Scholastic Press Association, co-sponsored by Shalhevet and held at Bnai David Judea Feb. 25 -28.

About 30 students from Shalhevet, Margolin Hebrew Academy in Memphis, Tenn., and Daniel Pearl High School in Encino, Cali. attended the conference, which also featured speakers from the Los Angeles Times, Vice Media and the Jewish Journal and as well as Israeli Consul General David Siegel and a panel of students from Harvard-Westlake School in North Hollywood.

Topics ranged from how the Jewish Journal covered last summer’s controversy over the Iran nuclear deal and how “new media” such as Vice cover sports to basics like layout, interview technique, and copyright and press freedom laws.  Another highlight was a talk by journalist and Shalhevet parent Julie Fax about the challenges of writing about one’s own community.

Rabbi Yosef Kanefsky of B’nai David-Judea led the discussion of lashon harah. He showed students controversial stories involving rabbinic figures involved in sexual abuse of students and constituents. These stories were published to protect the public, but could also cause embarrassment to the parties involved and could therefore be considered lashon harah.

His conclusion touched on how democracy coincides with Jewish principles. Since democracy is accepted by much of the modern world as a morally superior form of government, and democracy depends upon a free press, its principles can sometimes reshape the practice of Jewish law. Therefore freedom of the press, if done for the purpose of informing the public and not for sensationalism, overrides lashon harah, he said — but only when informing the public will prevent harm, such as future assault.

Other than workshops, students partook in a “swap shop” where they discussed their experience as journalists with one another and compared their newspapers.

“It was interesting to see how each group of kids run their paper,” said junior Maayan Waldman, Community Editor of the Boiling Point.

Students chose one of two workshops for each 50-minute time shot. Also on the program were Rob Eshman, Editor and Publisher of the Jewish Journal; and Eric Nusbaum, Deputy Sports Editor of ViceSports.com and a cousin of Boiling Point Torah Editor Alec Fields.

Mr. Nusbaum told students how to get started in sports writing, mentioning that there was no reason to wait.  Even high school students can submit stories to online media outlets, and if the stories are “clean” – that is, written well enough to need little or no editing – and on time, the may run.

Ms. Fax, mother of junior Ezra Fax, said writing about people she knew was the hardest part of her job.  She stated that reporters have a responsibility to report on the community, but should be careful in choosing their words.

Rebekah Spektor, Online Editor-in-Chief of the Pearl Post at Daniel Pearl Magnet High School in Encino, spoke about why her school was named after Daniel Pearl–an American-Israeli journalist kidnapped and murdered by Pakistani terrorists while on assignment shortly after 9/11.

Thursday evening’s meeting was in the Beit Midrash at Shalhevet, where heard an off-the-record talk from Consul General David Siegel of the Israeli Cosulate in Los Angeles.

Students from Harvard Westlake led a workshop where they showed students their own paper’s website and explained how they run it. They said they strive to post stories within 24 hours of them happening.

Attorneys Curt Brown and Lauren Drake spoke about the limits of press freedom in religious high schools when it violates religious tenets, and UCLA Law Professor Rachel Faulkner described how copyright laws apply to photos and music in print and on news websites.

Freshman Clara Sandler said that although she learned a lot from the conference, it was hard for her to juggle that with missing school.

“I’ll have to see about going back next year because of school work and pressure,” Clara said.

Initiated by Boiling Point faculty advisor Mrs. Joelle Keene, JSPA differs from other journalism conferences nationwide in that many of JSPA’s workshops discuss Judaism in the media. It also holds no meetings on Shabbat or Jewish holidays.