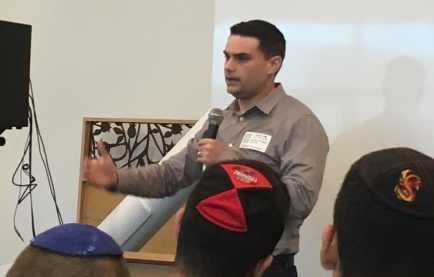 By Hannah Jannol, Clara Sandler, and

No: Free speech is different when it takes place at a high school

Ben Shapiro’s Sept. 12 appearance at an assembly of the 11th and 12th grades was controversial on two accounts. One, he has a history of fervid conservatism, and two,Shalhevet’s administration recognized this, so they limited the topics he could address during his talk, unbeknownst to students at the time.

People knew he was controversial, but few students in the room knew that on July 16 Shapiro had gone on Dr. Drew wearing a kippah and called a transgender woman “sir,” or called the legalization of gay marriage “a dark day in history” at a talk he gave at a shul. He claimed he does not believe the government should be involved at all in marriage, though he doesn’t protest heterosexual civil marriages when interviewed.

He’s said other things too. On his show for the Daily Wire, Mr. Shapiro has said he believes Colin Kaepernick’s decisions were irrational because there is no systemic racism in the U.S. today, thus denying the experiences of over 30 million people.

In another speech, he said African-Americans have no excuse to be poor and cannot blame society for their plight. He compared them to Jews, saying his ancestors could rise through the ranks of American society with hard work, so anyone could. He ignored the biggest difference between Jewish people and black people: skin color, which cannot be hidden and is always visible.

It was ironic that Mr. Shapiro spoke in the same month Shalhevet instituted its first Gay Students Alliance; Rabbi Segal wrote eloquently of the need to include LGBT students fully in all aspects of our community, even religious ritual; and the school adopted a six-point public pledge ensuring rights and a welcome for LGBT students in our school.

Which begs the question: what is the purpose of speakers at Shalhevet?

Freedom of speech is enshrined in our American values and constitution, and Mr. Shapiro certainly had a right to speak.  However, Shalhevet should not have invited him.

That is because Shalhevet is indoctrinating — it is an institution which has an obligation to develop a certain moral compass in its constituents, a compass that should be strong enough to be challenged later on, including by speakers like Ben Shapiro.

Here, we must heedfully pick the people we promote. Our school has a very powerful voice in the community, and especially among its students.

Obviously not every person Shalhevet brings in is endorsed by the school. During a Shalhevet Institute event last year, Rabbi Sharon Brous was one of the speakers; Shalhevet does not halachically recognize female rabbis. But she was one speaker of four at that event, representing one of several viewpoints. Ben Shapiro spoke alone.

David Meyers — a pro-J Street UCLA professor who spoke last year — provided a liberal antithesis to Ben Shapiro when he was invited to speak through the Shalhevet Institute, though Shalhevet does not support his views. But Mr. Meyers spoke after school, and listeners came voluntarily. Mr. Shapiro spoke during school hours to 120 students who had to be there.

Then there was the matter of censorship. Reb Weissman, as Mr. Shapiro noted, carefully screened his questions and told him ahead of time not to discuss anything but Israel and BDS. This policing failed; he was asked a question that compared BDS’s form of nonviolent protest to Colin Kaepernick, and managed to call Kaepernick an “idiot.” He said he would not elaborate because he was being “heavily policed,”  he said. Reb Weissman laughed nervously and corrected him, saying Mr. Shapiro was being “curated.”

The reasons he was being censored are the same reasons that he should not have been invited to the school in the first place. If the administration was concerned enough to restrict him, they should not have had him at all.  Or they should have publicly announced the censorship and denounced his non-Israel-related opinions.

Human beings are not cafeterias. We do not get to pick and choose what we like and ignore the rest, pretending that it does not exist. Mr. Shapiro is a full package, and he brings baggage that could not be dropped off at the door on his way in.

Does this mean we should analyze every single viewpoint of every speaker to make sure we agree with all of them?  No. Rare is the person whose views are so extreme as to go against core values of our school. Bringing such a person to Shalhevet risks weakening the values of tolerance we say we promote, and even worse, indoctrinating students toward intolerance..

Mr. Shapiro’s parting words to the upperclassmen were that we are all Jews, and therefore we represent all Jews. If that is true, then calling a transgender woman “sir” on television while wearing a kippah paints all of us as close-minded and disrespectful. Linking Zionism with that tarnishes our homeland.

The Jews that Shalhevet seeks to send out into the world are the opposite of all these things. 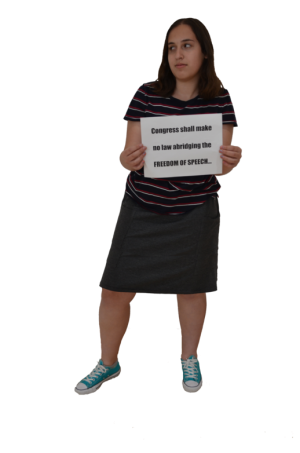 Yes: Freedom of speech protects helps us learn to think on our own

I listen to Ben Shapiro on the AM 870 radio morning show “The Morning Answer,” and to his podcasts on the Daily Wire on a regular basis.

Do I agree with everything he says? No. Do I think that he’s sometimes a little radical in his ideals? Of course. But in a diverse country where people are encouraged to disagree with each other, I think that it is vital that we hear all sides of a particular issue, even if they’re offensive.

Last year, the school brought David Myers to speak. Mr. Myers is an outspoken liberal associated with J-Street. The same way that we can allow someone from the far left to address the student body, we should have someone on the far right of the spectrum speak to us, too.

I want to hear from all sides, even sides that I don’t agree with. I want to hear from extremists on both sides. I want my opinion to be challenged. We live in a world where there are people of different races, genders, ethnicities, religions, sexualities and life experiences. If you accept that fact, then you should accept and be willing to listen to all opinions, even if they are different from your own.

I happen to think that the centrist opinion is boring. I would consider my personal political views to lie somewhere in between a conservative Democrat and a liberal Republican, so I personally am in the middle. But when I hear someone speak, I want to hear someone with passionate, clear opinions. I want to hear someone who doesn’t apologize for feeling this certain way, who has thought things through and come to conclusions he or she wants to strenuously defend.

Ben Shapiro has these right-wing opinions. Ben Shapiro challenges my viewpoint. I am so glad the school brought him in to speak, because he changed the narrative, he took a different approach to the conversation.

I did have a problem with his speech, however.  It was partially censored. The only way that we were allowed to ask questions was by writing them on note cards, and then Reb Weissman sifted through them to choose which to ask or to censor.

Mr. Shapiro was only allowed to speak on the issue of BDS, the Boycott-Divest-Sanctions movement that seeks to change Israeli policy by attacking it economically, the way apartheid was attacked and ultimately defeated in South Africa.  Why? Why couldn’t he talk about something more controversial, like LGBTQ issues—something Rabbi Segal has made a big topic recently –  or women’s roles in politics and Judaism, which are a constant conversation in the Shalhevet community? In a school that prides itself on open conversation, why couldn’t we have it?

Ben Shapiro represents controversy and questioning; there’s no point in having him if he can’t go there. He represents the other opinion. He only spoke of something that we as a community can agree on, and he provided a great perspective and wonderful tactics on how to combat a threat to Israel.

When he speaks generally, he talks about things that we don’t necessarily want to hear — he’s comfortable with “bursting our bubble.” Here, he wasn’t allowed to.

Some may say that Mr. Shapiro’s right-wing opinions should have kept him from speaking because he’s “offensive.”  But that’s a subjective term – a term that implies disagreement causes personal offense.  Mr. Myers’ opinions are also offensive to some people.  If we censor our speakers because they may cause offense to someone, then where does the First Amendment go?

Last I checked, we have freedom of speech in the United States, and we normally do at Shalhevet as well. The same way that people are allowed to protest in Charlotte, N.C., and Ferguson, Mo., students at Shalhevet have a right and a need to hear from all perspectives, the more challenging the better.  If we discriminate against one type of speaker, we make that impossible.

The diversity in opinion that is a hallmark of the Shalhevet experience is ultimately how we learn to formulate opinions of our own.  It’s good that Ben Shapiro came, as this is a place where all views – all views – should be welcome.