Spanish-speaking staff at local restaurants learned Hebrew before English, and are now learning Judaism, too 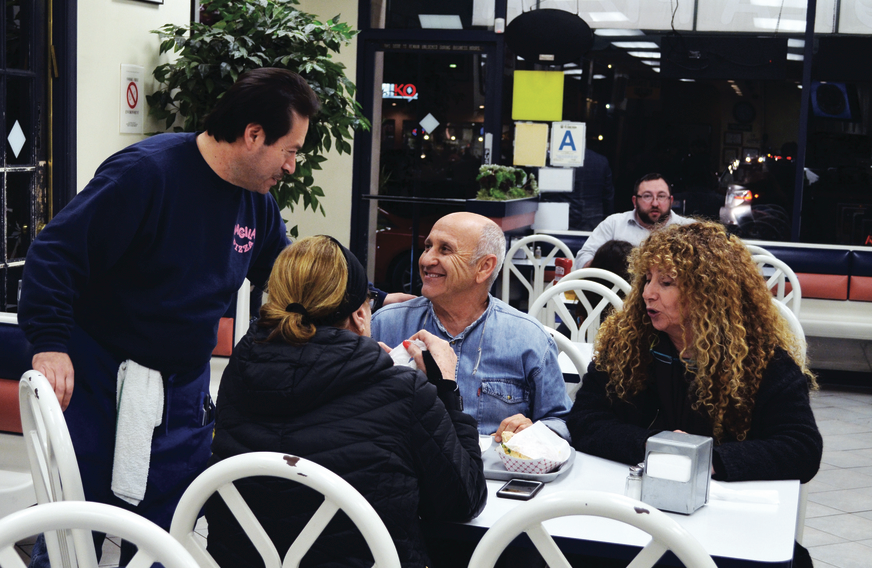 FRIENDLY: Alfredo Hernandez takes any opportunity he can get to speak Hebrew, which he said is the trick to learning a new language.

At the popular kosher restaurants Nagila Pizza and La Gondola, ingredients aren’t the only things mixing in the kitchen. Languages and cultures blend together like the steaming oregano, basil and tomatoes, with even some religion mixed into the sauce.

Armando Rodriguez immigrated to the United States from Durango, Mexico, in 1987, knowing only knew a few words and numbers in English.  But after working in the Israeli restaurant Golan for three years, he was nearly fluent in both English and in Hebrew.

He worked there for another four years as a restaurant dishwasher, kitchen assistant and waiter before becoming a server at La Gondola on Wilshire Boulevard, where he has been now for 15 years.

Similarly, Alfredo Hernandez was visiting the States to see his brother 15 years ago when he saw a “Help Wanted” sign in front of Nagila Pizza on Pico. He applied, and ever since has been taking orders, serving food and wiping down tables– and learning Hebrew.

The pair, who have never met but say customers constantly tell them about one another, say the trick to learning Hebrew — a secret day school teachers might benefit from — is speaking it.

“When you want to learn, you can do it,” said Mr. Hernandez, or Freddy, as his customers and coworkers call him.  At work he speaks half in Hebrew and half in English, and a bit of Spanish with his co-workers if they prefer.

“To tell you the truth, when I came here, most of the people, my boss even, came from Israel, so they speak Hebrew all the time when they’re talking about somebody. So that’s why I tried to learn,” he said.  “I liked learning another kind of language. I wanted to know what was going on, so I learned Hebrew.”

He said he had a co-worker who had been at Nagila for more than 30 years and still speaks just English and Spanish.

“When somebody comes from Israel for example, and doesn’t speak very good English, if there is no one in front who speaks Hebrew, they ask me ‘Hey, Freddy, what does he want?’”

Mr. Rodriguez, on the other hand, was pretty much forced to learn Hebrew because the patrons at Golan were almost all Israeli, and very few people spoke exclusively in Spanish or English.

“My boss didn’t speak English — they were Moroccan,” Mr. Rodriguez recalled. “So he was always talking to me and putting three languages in one — ‘Armando, bring me hamatateh, to clean aqui’ for example.”  Hamatateh means the broom in Hebrew, and aqui in Spanish means here.

Because of this, he said, Hebrew just came to him “naturally.”

“Honestly I don’t know how I got it so fast, it was like three years and I was already able to have a conversation,” he said. “Everybody was always speaking Hebrew in the restaurant, I was only listening to Hebrew.”

For example, in Hebrew and Spanish the noun always comes after the adjective, words are gendered and phrases are different if one is referring to someone younger or older.

Mr. Hernandez said his only struggle was pronunciation.

“Hebrew is hard because you have to have a more gutteral” — he pauses to make the ch sound, as in challah — “way to pronounce it.”

But now he has gotten the hang of it. Phrases like Baruch Hashem (thank God) and ma shlomech (how are you)  roll off his tongue — or rather out of his throat — as naturally as they do for an Israeli or any other Hebrew speaker.

The two say they get a variety of reactions when they speak Hebrew.

They’ve also become friends with some of the customers.

“I never worked with the Jewish people or any other religion when I was in Mexico,” Mr. Hernandez said.  “Now, here, they’re nice people. The Jewish people are nice, kindly, justly, most of them, so that’s why after many years I’m still here.”

Brad Wixen, a patron of La Gondola of two decades, remembers how he became friends with Mr. Rodriguez. Back when there were no apps to calculate a tip,  he accidentally gave him a tip of  1.5 percent instead of 15.

“I went happily down to the parking lot and when I got there, there was Armando,” Mr. Wixen said. “And he said — not attacking me, no insults — ‘I honestly want to know what I did wrong.’”

After some brief confusion, Mr. Wixen apologized for the mistake.

“I’ve never detected anything but friendship and warmth from him,” Mr. Wixen said. “…Whenever I come in, I’m like a celebrity — he’s very nice to me and it seems quite authentic.”

One recent afternoon, a customer asked Mr. Hernandez to split a check between some cash and credit cards, to which he responded metsuyan —  excellent.  The customer replied with todah, Hebrew for thank you.

A few moments later, Mr. Hernandez instructed some co-workers in Spanish and then returned to the interview, speaking fluent English. He said the back-and-forth isn’t difficult “once you’ve been doing it for 25 years.” 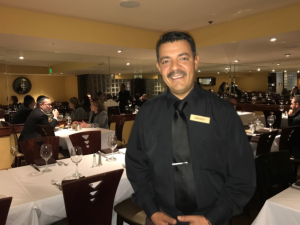 But Hebrew isn’t the only unexpected knack the two men have developed by working in kosher restaurants. They have also developed a deep connection with the Jewish religion.

Mr. Hernandez lives two blocks away from Nagila with his wife and 11-year-old daughter — “in the heart of the Jewish community,” he says smiling. He says he keeps the Yom Kippur fast, avoids bread on Passover, and lights a menorah on Hanukkah.

Sometimes he goes to Young Israel of Century City on Shabbat to hear the prayer service and Torah reading.

Mr. Rodriguez of La Gondola is Catholic and goes to church on most Sundays, but says he prays privately in Hebrew throughout the week. He lives in Arleta with his brother, who has special needs.

For him, the Hebrew language is “powerful.” He says he knows kol hahalachot — all the Jewish laws.

That, combined with his natural aptitude for Hebrew, has made him a fixation of rabbis who want to convert him. One rabbi from the Kabbalah Center brought him prayerbooks and books on the Shema and Jewish traditions, he said.

But Mr. Rodriguez wants to remain Catholic, because he believes he was Jewish in a former life.

Mr. Hernandez has been considering converting, because of how much he likes the Jewish people, values and community. He said sometimes people tell him he must have Jewish roots.

He said his mom has “totally white skin” and one of his uncles has green eyes and light skin.

His mother’s last name, he said proudly, was Perez — “like Shimon Peres,” he noted.

“There are no words to describe how it has helped me,” said Mr. Rodriguez.  “It has helped me a lot. The more you learn, the more doors you open to yourself, to your life, to your future.”